Karnad played the role of 'Mr Khan' in ‘Aparoopa’, which was directed by Assam's noted filmmaker Jahnu Barua

In ‘Aparoopa’, which is a 1982 Assamese language film, the music was directed by legendary artiste Dr Bhupen Hazarika.

‘Aparoopa’ was the first Assamese feature film produced by the National Film Development Corporation of India.

In the film, Karnad played the role of Mr. Khan.

The other cast members of the film included Biju Phukan, Suhasini Mulay and Sushil Goswami.

Karnad, who had a good relation with Assam, came to the state on several occasions to deliver speech related to drama.

He was born at Matheran in Maharashtra in 1938.

Later, their family shifted to Karnataka.

The Kannada writer made his acting and screenwriting debut in ‘Samskara’ which was released in 1970. The film won the President’s Golden Lotus Award.

Karnad, who acted in classic TV show ‘Malgudi Days’ where he played the rol of Swami’s father, also served as the director of the Film and television Institute of India (1974-75) and chairman of Sangeet Natak Akademi (1988-93).

Karnad’s plays were translated into English and several other Indian languages.

Karnad, who was a Rhodes Scholar, wrote his first play ‘Yayati’ in 1961 at the University of Oxford.

Apart from ‘Yayati’, his other famous plays include ‘Nagmandala’ and ‘Tughlaq’. 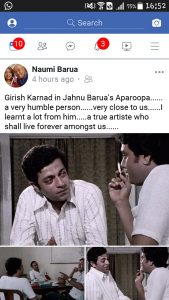 Karnad also acted in movies like ‘Swami’ and ‘Nishant’.

His TV credits also include a hosting stint in the science magazine ‘Turning Point’ on Doordarshan in the early 1990s.

As the news of his demise spread, condolence messages are pouring in.

In her facebook page, Barua stated on Monday: “Girish Karnad in Jahnu Barua’s Aparoopa… a very humble person…very close to us…learnt a lot from him… a true artiste who shall live forever amongst us…”

Saddened to learn about the demise of veteran actor and playwright #GirishKarnad.

His contribution to the field of theatre and cinema will never be forgotten. My sincere condolences to his bereaved family members, friends and well-wishers. pic.twitter.com/wf119p2LBn

Assam chief minister Sarbananda Sonowal has also expressed his condolence at the demise of Karnad.

On his Twitter handle on Monday, Sonowal stated: “Saddened to learn about the demise of veteran actor and playwright #GirishKarnad.”

“His contribution to the field of theatre and cinema will never be forgotten. My sincere condolences to his bereaved family members, friends and well-wishers,” he added.

Karnata government has declared a public holiday on Monday to pay respect to the renowned artiste.