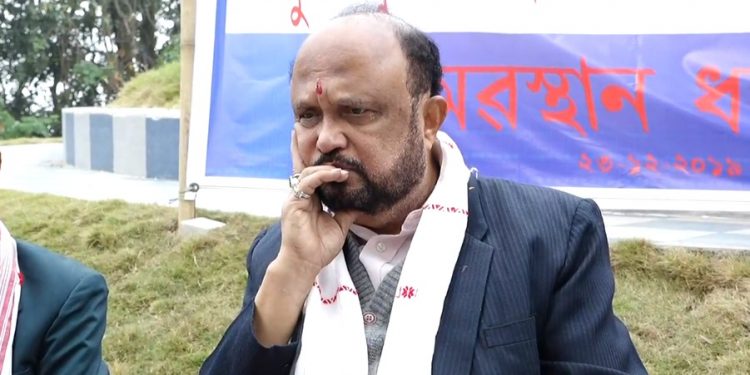 Former Assam chief minister Prafulla Kumar Mahanta, who turned 67 on Monday, decided not to celebrate his birthday as a mark of protest against the Citizenship (Amendment) Act (CAA).

Instead of celebrating his birthday, the senior Asom Gana Parishad (AGP) leader chose to stage a sit in protest in front of the statue of Mahatma Gandhi at Gandhi Mandap atop Sarania Hills in Guwahati against the citizenship law.

AGP MLA from Patacharkuchi constituency Pabindra Deka and senior party leader Gunin Hazarika also joined Mahanta, who staged the protest from 9 am to 1 pm on Sunday.

While the lone Rajya Sabha MP from the party, Birendra Prasad Baishya voted in favour of the Citizenship (Amendment) Bill (now Act)  in the parliament, the two-time Assam chief minister has continued to raise his voice against the CAA.

Despite Mahanta and some other leaders’ opposition, the AGP, which has three ministers in the BJP-led Assam Government, had decided to back the bill in the parliament.

All three AGP ministers–Atul Bora, Keshab Mahanta and Phani Bhushan Chowdhury—refused to pull out from the government even after several regional committees of the party demanded their resignation as ministers.

Mahanta said the CAA would hurt the Assamese language and culture to a large extent.

He also slammed the party leadership in strong words for their failure in taking a bold stand against the Act.

“It was unfortunate that we voted in favour of Citizenship (Amendment) Bill (CAB) in the Lok Sabha and Rajya Sabha,” he told earlier.