Regional Meteorological Centre has predicted heavy rainfall at most places of Arunachal Pradesh, Assam and Meghalaya in the next 72 hours 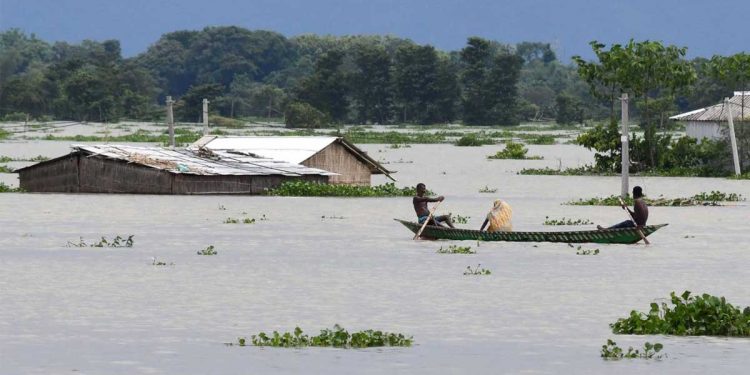 Flood continues to wreak havoc in Assam as the overall situation remains unchanged with nearly 25 lakh people still bearing the brunt of the deluge in the state.

Five new deaths were reported on Sunday from across the state, taking the overall flood fatality tally to 102.

Two deaths each were reported from Barpeta and Kokrajhar districts and one from Morigaon.

The flood situation in the state is expected to deteriorate further as the Regional Meteorological Centre has predicted heavy rainfall at most places of Arunachal Pradesh, Assam and Meghalaya in the next 72 hours.

As per the Assam State Disaster Management Authority (ASDMA), altogether 23 districts are still reeling under floods.

The Central Water Commission (CWC) has further informed that the Brahmaputra river has been flowing above the danger level in Jorhat, Sonitpur, Goalpara and Dhubri districts.

Moreover, rivers Dhansiri in Golaghat, Jia Bharali in Sonitpur, Kopili in Nagaon, Beki in Barpeta and Kushiyara in Karimganj are also flowing above the danger mark.

Goalpara is the worst-hit district among the flood-hit districts of the state, affecting a total of 4,70,253 people in 289 villages under four revenue circles.

Overall 45,912 people have been taking shelter in 457 relief camps across the state.

It may be mentioned here that floodwaters in the past 24 hours have damaged an embankment in Barpeta along with a number of roads in Bongaigaon and Morigaon.

Incidents of erosion have also been reported from Chirang district during this period.

Floods have so far claimed lives of 129 animals in Kaziranga.