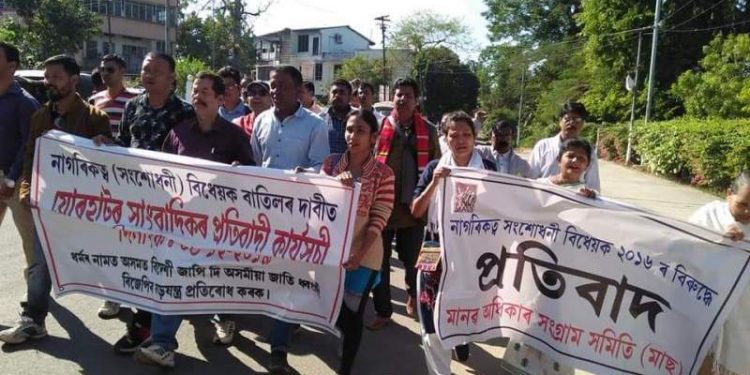 Members of Jorhat Press Club also took out a rally against the Bill.

The Asam Sahitya Sabha (ASS), the apex literary body of the state, finally waked up from deep slumber.

The ASS, which faced a lot of flak for maintaining silence over the Citizenship Amendment Bill (CAB), on Friday took to streets in Jorhat.

Members of Sabha staged a two-hour sit in demonstration in Jorhat against the CAB.

The literary body also submitted a memorandum to the Prime Minister through the Jorhat deputy commissioner’s office.

The ASS in the memorandum said the CAB would make the indigenous people a minority in their own land and that the Bill should be withdrawn.

The members of All Assam Students’ Union (AASU) along with the All Assam Chutia Students’ Association blocked NH 57 near the West Bypass.

Members of Congress also staged a hunger strike from 8 am to 3 pm against the Bill in front of the DC’s office complex.

The Jorhat unit of AASU along with several other organisations took out a rally and staged a sit in demo in front of the DC’s office complex.

The members of Jorhat Press Club also took out a rally against the Bill and appealed to all to come out enmasse against the ‘nefarious intentions of the Centre’ to make the indigenous people here a minority in their own state.