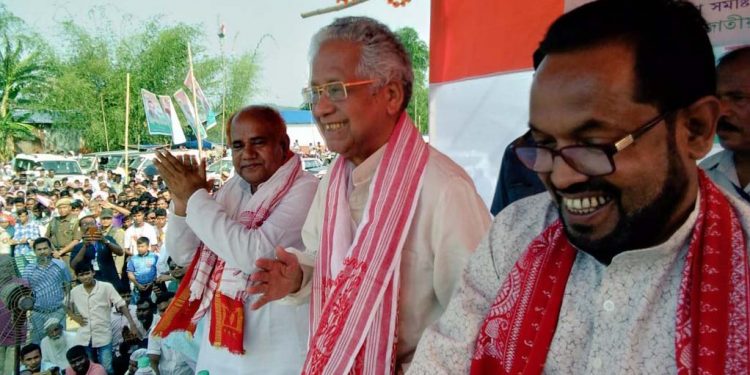 Former Assam chief minister Tarun Gogoi on Wednesday appealed to the voters of 4 No. Dhubri Parliamentary constituency in Goalpara to defeat the ‘two brothers, choto bhai and boro bhai’ in the ensuing Lok Sabha election, indirectly referring to Badaruddin Ajmal of AIUDF and Himanta Biswa Sarma of BJP.

Delivering his lecture in a thickly attended election campaign rally at Tarangapur of Jaleswar Assembly constituency in Goalpara district, Gogoi targeting the duo said: “Ajmal says, Modi is my elder brother. Ajmal also says that Himanta is my younger brother. So, we will have to defeat both this elder and younger brothers.”

Launching a scathing attack on Himanta Biswa Sarma, his former aide and present star campaigner of BJP, Gogoi alleged, “This choto bhai or younger brother is very dangerous. He is practising ‘rigid Hindutva’ and dividing Hindus among themselves by spreading hatred, faithlessness and conflict.”

He asserted that he has taken oath to defeat this these younger brothers or ‘choto bhais’.

“He (Ranjeet Kumar Dass) says that he doesn’t want to visit these places and think these Muslim-inhibited places like Bangladesh or Pakistan. They think these local people to be foreigners. But these people are local and Indian and they have contributed to the greater Assamese society. When I was the chief minister Ranjit Das even didn’t dare to call these people Foreigners,” said Gogoi.

Besides Gogoi, Congress leader and MLA Rupjyoti Kurmi also spoke in the election meeting and criticised BJP for disrespecting the people of Assam by supporting the Citizens Amendment Bill when the whole state went against it including the families of 855 myrtars of Assam movement.

Both Gogoi and Kurmi attended another poll rally at Rakhaldubi of West Goalpara. Gogoi was campaigning for the Dhubri Congress candidate and two-time MLA Abu Taher Bepari.

The sitting MP of Dhubri Lok Sabha and AIUDF supremo Badruddin Ajmal has a stronghold in the constituency.

Ajmal had, prior to the declaration of Congress candidate, repeatedly claimed that his party has an understanding with the Congress.

Thus, people thought that Congress would field a weak candidate against him only by maintaining formality.

However, at the nick of the time, Congress fielded strong candidate like two-time MLA Abu Taher Bepari as its candidate giving Ajmal a big jolt.