Govt to set up electric bus manufacturing unit in Assam 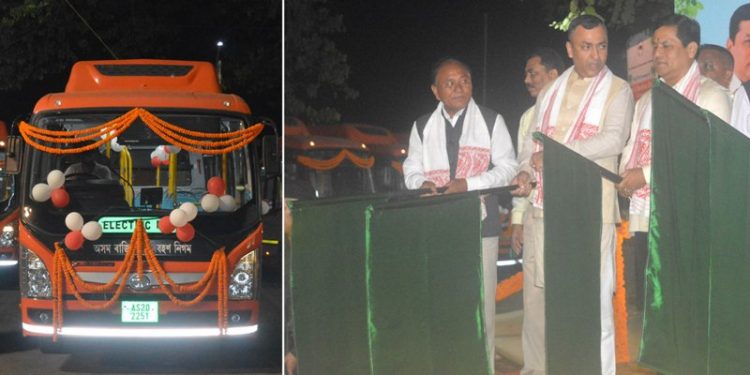 The buses were introduced under Assam State Transport Corporation (ASTC) in a programme at Assam Administrative Staff College in Guwahati.

The buses were introduced under Assam State Transport Corporation (ASTC) in a programme at Assam Administrative Staff College here.

The new buses procured under ‘Faster Adoption and Manufacturing of Electric Vehicles’ (FAME-1) and introduced as a pilot project will ply from Panbazar to Kamakhya Temple.

He said depending on the success of this pilot project, the government will introduce electric bus services across the state in phased-manner.

Stating that the state government is working to transform Guwahati as the gateway to the South East Asian countries, the chief minister said that such a vision to materialise requires great deal of support from all sections of society.

He said introduction of the electric vehicles is a small step towards achieving the government’s goal of making Assam a pollution free state and there is a lot to be done in future.

He said with the introduction of 15 electric buses in Guwahati, the state government laid the foundation for an emission free transport system in the state.

Patowary further said the government of India launched the FAME scheme last year and Assam was one of the first five states to implement it by procuring these 15 electric buses.

He said these buses will have all the modern amenities, security features and most importantly will not release any harmful gas.

The transport minister said his department will soon ink an MoU with a Hungary based company for setting up of an electric bus manufacturing unit in Assam.

ASTC MD Anand Prakash Tiwari said after the success of FAME-1, state government will introduce 100 additional electric buses under FAME-2 for which necessary process have been started.

Out of these buses while 50 buses will ply in Guwahati, 25 each will be pressed into service at Jorhat and Silchar.

He said that apart from setting up a CNG stations at Dibrugarh, efforts are on to set up more such stations in future.