President of India, Ram Nath Kovind was one of the first to congratulate Mary Kom on her striking gold at the Common Wealth Games.

Kovind had twitted: Congratulations Mary Kom, icon of Manipur and of India, for winning the gold medal in women’s 45-48 kg boxing event at #GC2018. You make us prouder with every punch!

Union Minister of State for Home Affairs Kiren Rijiju in his official twitter handle posted: Mary Kom, you have done it again! India is proud of you and all the sportspersons who won medals in the Commonwealth Games. 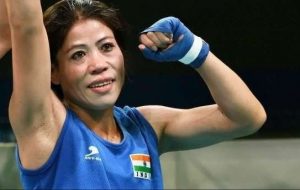 Union Minister of Sports and Youth Welfare, Rajyavardhan Rathod, who was also an Olympic shooter tweeted: Congratulations to @MangteC who is India’s 1st woman boxer to clinch a ?in the 45-48 kg #GC2018Boxing in her 1st CWG appearance.

Union Minister Vijay Goel also congratulated the star boxer for winning the gold medal at her maiden outing in the Commonwealth Games. 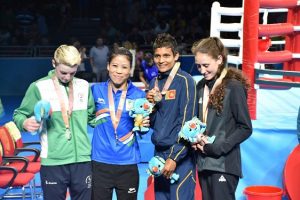 Assam Chief Minister Sarbananda Sonowal also tweeted stating: You have done it again. Nothing can be a bigger gift to us on this New Year and Bihu. Thanks @MangteC. Your punches keep making India proud. #MaryKom #GC2018.

Meghalaya Chief Minister Conrad Sangma also tweeted: Congratulations @MangteC for clinching the gold at Commonwealth Games, Gold Cost. The people of #India and tribesmen across #NorthEast states are elated at your accomplishment. @narendramodi