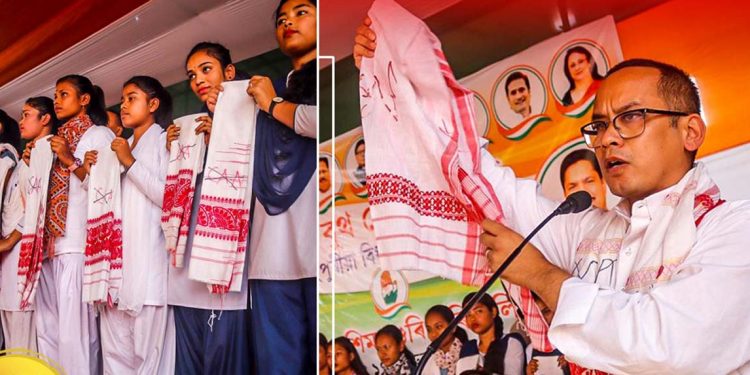 Congress has set a target of collecting 50 lakh Assamese gamosas with anti-CAA messages for the proposed Martyrs’ Memorial in Guwahati.

Assam Congress on Wednesday strengthened its anti-CAA (Citizenship Amendment Act) stance as the party asked its members to visit every house of the state and collect gamosa with anti-CAA messages which will be displayed in the proposed ‘Martyrs’ Memorial’ in Guwahati.

“The Congress is building an anti-CAA memorial in Guwahati and I would request every Assamese to share gamosas with your message with us,” said Congress Manifesto Committee chairman Gaurav Gogoi while addressing a meeting at Bihpuria in Lakhimpur district.

“You may sign the gamosa and send it to us through courier or hand it over to any party worker when he visits you,” Gogoi told the party members.

Saying that this is a chance for them “to be a part of history”, Gogoi humbly requested the party workers to write why they “don’t want CAA in Assam” along with their name on a gamosa and send the same to the party’s office in Assam.

“It will find a place at the grand memorial to be built in Guwahati in memory of the anti-CAA movement,” said Gogoi in a tweet.

“We have our ears on ground and we expect that party will get at least 50 lakh Gamosa from the state and all of them will be displayed at the upcoming memorial,” said Assam Pradesh Congress Committee (APCC) president Ripun Bora while saying that the sacrifices to save ‘Assam Pride’ will not be forgotten.

“CAA shall be rooted out and we shall make history! As per Assam Congress’ request, please write your name and anti-CAA message on a gamosa. Send it to the Congress party office. Your gamosa shall be memorialised at the grand memorial to be built commemorating anti-CAA movement,” said Bora in a tweet.

Debabrata Saikia, the Congress Legislature Party (CLP) leader in the Assam Assembly said, “The dark days of BJP’s oppression of Assamese people are about to get over and Congress will make sure that CAA is not implemented in Assam.”

“Come forward & become one with history! As requested by Assam Congress, please write your name & anti-CAA message on a Gamosa & send to the Congress party office for your Gamosa to be put up at the grand memorial, coming up in Guwahati,” said Saikia in a tweet.

Pradyut Bordoloi, the chairman of the Congress Campaign Committee said people of Assam will not forget the bruise that BJP has given to the ethos of Assam through its divisive and communal politics.

“Assam, this is your tryst to become a part of history! A Gamosa in your name with a message against CAA will find a place at the grand memorial site to be built in Guwahati. As requested by Congress, hurry up & send your Gamosa to Assam Congress office,” said Bordoloi in a tweet.

Congress Publicity Committee chairman Rakibul Hussain asserted that the gamosas will display the public sentiment against the “black law”.

“Let us write a new chapter in history, together! Pay heed to Assam Congress‘s request of sending a Gamosa with your name & message to Congress party office & have it memorialised at the anti-CAA grand memorial that will come up in Guwahati when Congress comes to power,” Hussain said in a tweet.

The Congress Media and Communication Committee chairman Abdul Khaleque has appealed to the people of Assam to send gamosa with anti-CAA message to the Congress office.

“A chance to become part of history! As requested by Assam Congress, write why you oppose CAA along with your name on a Gamosa & send it to the Congress party. Your Gamosa will be made an integral part of the memorial we shall build to immortalize the anti-CAA movement,” Khaleque tweeted.