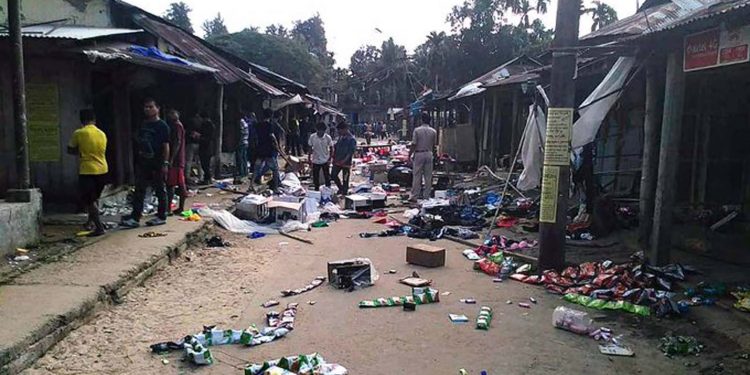 View of a violence-hit area in Tripura. Image credit - www.pennews.net

The 24-hour statewide bandh called by the Tripura Congress against the Citizenship Amendment Bill, 2019, paralysed normal life in Agartala and other parts of Tripura on Thursday.

Earlier on Wednesday, Tripura Congress took out a rally against the contentious Citizenship Amendment Bill.

The Tripura Congress alleged that the police baton-charged on the party activists during their peaceful rally on Wednesday.

To disperse the protesters the police resorted to baton-charge in which several Congress workers injured.

Three journalists were also injured in the baton-charge. They are Mihir Sarkar, Milton Dhar, and Bapi Acharjee.

In protest against the atrocities of police, the Tripura Congress called for Tripura bandh on Thursday across the state.

Due to the bandh, normal life was totally paralysed in Agartala and other parts of the state.

Vehicles also remained off the roads in the state due to the bandh.

Train services were also suspended in the state on Thursday.

After a continuous 3 days’ strike, called by the regional parties against the CAB, the Tripura Congress’ call for 24-hour strike affected the normal life across the state for the fourth day.

Shops, business establishments, and educational institutions downed their shutters in response to the strike.

Vehicle movements were halted. However, some people were seen moving on motorbikes.

The strike was called in protest against police brutality displayed on Wednesday evening when 3 persons were seriously injured in baton-charge during the Congress rally at the Post Office Chowmuhani.

The picketers gathered at the Congress Bhavan at Post Office Chowmuhani and shouted slogans against the BJP government in the state.

After the meeting, the organization withdrew the indefinite strike in protest against the CAB.

JMACAB leaders told that the CM assured them that the state government would discuss with the central government about the bill.

Tripura University and MMB State University have cancelled all its examinations up to Friday.

Internet and SMS services in the state were snapped on Thursday also.

As the situation deteriorated in Tripura, two columns of the Army have been deployed in the state.