Sonowal asks DCs to complete the process of allotting land pattas to one lakh beneficiaries by March 31, 2020 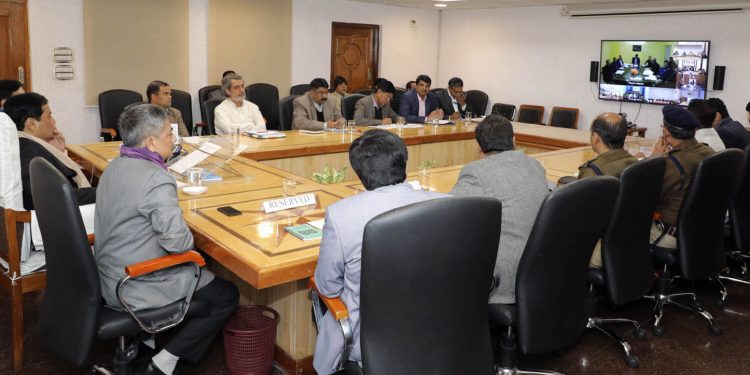 The chief minister’s directive came during a video conference with the DCs and SPs to review the implementation of government schemes at the conference hall of the Chief Minister’s office in Janata Bhawan on Thursday.

Sonowal also asked the DCs of the districts to develop a ‘spirit of collectivism and belongingness’ in implementing central and state government schemes, by touring the districts extensively.

The chief minister called the meeting with the DCs and SPs at a time when the anti-CAA protest programmes have been participated by people from all walks of life in huge numbers.

He also asked the DCs to address the public frequently and adopt a rigorous working style to pass on the fruits of good governance to the people of the state.

Sonowal made it eloquently clear to complete the implementation of welfare schemes on a war footing for all sections of the people especially poor, farmers, villagers, and women, said a government press communiqué.

Sonowal said the Assam government for the first time has adopted the programme to allot land pattas to the indigenous people on a large-scale.

He asked the DCs to complete the process of allotting land pattas to one lakh beneficiaries by March 31 of the current financial year.

He also asked the DCs to generate awareness on the Arundhati Scheme which the Assam government will roll out for the newly registered married couple from January 1, 2020.

Under the scheme, a married couple will be provided Rs. 30, 000 for purchasing jewellery.

Sonowal asked the DCs to expeditiously implement the PMAY scheme to provide ‘dignity and shelter’ to the beneficiaries.

He also asked the DCs to look for land in consultation with the CEOs of Zila Parishad and revenue circle officers for the landless beneficiaries to construct houses and give shelter under PMAY scheme.

Sonowal also set a target on the part of DCs for giving land on government value to the landless beneficiaries.

He asked the DCs to decide on the possibility of setting Adarsha Village to accommodate villagers under the scheme.

He requested the DCs to expeditiously identify land in tea garden areas in consultation with other stake holders for setting up high schools.

Sonowal also took stock of the schemes under the 14th Finance Commission and asked the DCs to organise their men and machinery for the implementation of the schemes.

The CM Sonowal asked SPs to oversee the construction of police stations under MOITRI scheme and ensure their early completion.