Clamour for introduction of Tai language in Assam schools 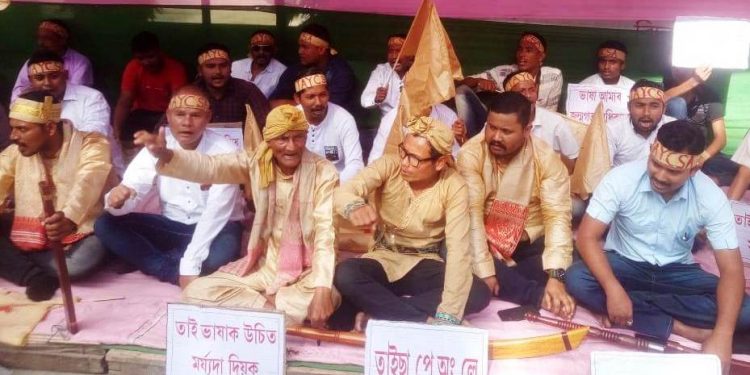 The Lakhimpur district committee of TAYCSA on Monday staged a sit-in demonstration in North Lakhimpur.

Tai Ahom Yuva Chatra Sanmilan, Assam (TAYCSA) has demanded the introduction of Tai language in the schools and colleges of Assam.

The Lakhimpur district committee of TAYCSA on Monday staged a sit-in demonstration in North Lakhimpur in support of their demands.

Demanding the inclusion of the Tai language in Unicode, TAYCSA also called for the introduction of the same language in Assam curriculum from primary to higher education including at the university level.

The memorandum also referred to the demand made by the TAYCSA on September 27 this year before the vice chancellor of Madhabdev University, Naryanpur requesting the introduction of Tai language in the university.

They also expressed their displeasure over the alleged indifferent attitude of the Vice Chancellor towards their demand.

The organization threatened to launch strong movement if their demands were not fulfilled by the state in coming days.

“We demand a special treatment for the Tai language by Assam government. Otherwise, we will be forced to launch massive agitations,” said Gogoi.