In a sensational development, the ULFA-Independent has claimed that the central intelligence agencies along with the Assam and Arunachal Pradesh Police forces are planning to kill the two abducted oil company employees.

The ULFA-Independent has claimed that the Indian Armed Forces are “planning to kill the two abducted oil company employees instead of ensuring their safe release.” 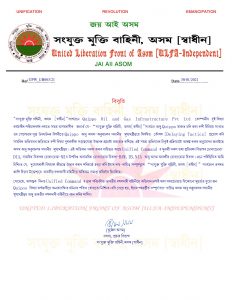 “We are sure of the fact that instead of ensuring the safe release of the two oil company employees, the Indian armed forces are planning to kill the two persons and falsely blame the ULFA-Independent for their deaths,” an ULFA-Independent statement stated.

The ULFA-Independent has further claimed the Chief Ministers of Assam and Arunachal Pradesh – Sarbananda Sonowal and Pema Khandu have recommended an armed operation to secure the release of the two abducted persons.

The outfit further claimed that Assam and Arunachal Pradesh Chief Ministers are adopting ‘delaying tactics’ to facilitate ample time to the armed forces and intelligence agencies to plan and carryout the operation.

“The entire operation is a multi-agency operation, which is being led by the Unified Command and also involves intelligence agencies such as the Defence Intelligence Agency (DIA), Military Intelligence (MI), Research and Analysis Wing (RAW), Intelligence Bureau (IB), National Investigation Agency (NIA) and also intelligence departments of the Assam and Arunachal Pradesh Police,” the ULFA-Independent statement further claimed.

In its sensational statement, the ULFA-I further stated that “if any untoward incident happens to the two abducted employees of the Quippo Oil and Gas infrastructure Pvt Ltd, the ULFA-I will not be responsible for it. Instead the Indian Armed Forces will be the ones to be blamed”.

Earlier, the ULFA-Independent had set February 16 as the deadline for oil company –  Quippo Oil and Gas Infrastructure Limited, to secure the release of its employee Ram Kumar, who hails from Bihar.

Threatening to kill Ram Kumar, the ULFA-I said, “If there is no response from the company by February 16, necessary action will be taken against Ram Kumar the next day. There will be no further extension of time.”

Radio operator Ram Kumar (35), from Bihar and drilling superintendent Pranab Kumar Gogoi (51) from Assam’s Sivasagar district were abducted by a group of ULFA-I and NSCN militants on December 21, while they were working at the Kumchaika drilling site in Changlang district of Arunachal Pradesh.

ULFA-I has reportedly demanded a ransom of Rs 20 crore for the release of the abducted duo.

Earlier, the ULFA-I also released a video of the two kidnapped employees of the oil company where the duo can be seen pleading their respective State Governments and Chief Ministers to secure their early release.