Actors, singers take to streets in Guwahati against CAB 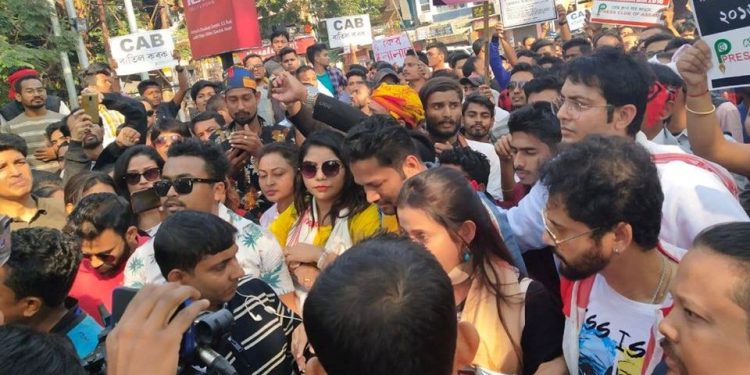 A large number of celebrities and their fans took out a rally against the bill from Chandmari to AASU headquarters in Guwahati.

After facing flak on social media for remaining silent on Citizenship (Amendment) Bill (CAB), a section of artistes of Assam on Tuesday took to streets against the Bill.

They also pledged that they would not take part in government programmes till the contentious CAB was scrapped.

A large number of celebrities and their fans took out a rally against the bill from Chandmari to AASU headquarters in Guwahati.

The protesters opposed the bill through songs and slogans.

Actors Barsha Rani Bishaya and Utpal Das, singers Manas Robin and Dikshu Sarma and several others raised their voices against the bill.

They chanted slogans like “Withdraw CAB”, “We will not bear the burden of foreigners”, “Stop politics over religion”, “Assam rejects CAB” among others.

“If this bill is passed, the Assamese people will become a minority within the state itself, and we cannot accept this bill at any cost,” singer Dikhsu Sarma said.

Actor Utpal Das said the artistes were vehemently opposed to the bill. “The protests will continue until the bill is scrapped,” he said.

The artistes exhorted people to boycott government programmes, including the summit between Prime Minister Narendra Modi and his Japanese counterpart Shinzo Abe that is scheduled to be held on Sunday.

“Before an artiste, I am an Assamese and I will continue to oppose the bill. The people who are protesting are not fools,” said Barasha.

“We cannot allow anybody to destroy our community, culture and tradition,” she added.

Barsha appealed to the government to listen to the voices of the people of the state.

On Monday, actor Ravi Sarma resigned from the primary membership of the BJP.

Singer Zubeen Garg also opposed the bill and exhorted the artistes to join the anti-CAB protests.

Veteran filmmaker Jahnu Barua has decided not to participate in the Assam State Film Awards as a protest against the bill.