BJP national working president Jagat Prakash Nadda on Tuesday stated that the party is providing full support to those affected by floods in Assam.

Expressing his sympathy for the affected families, Nadda urged the BJP karyakartas to help the people affected by floods.

Her stated on his official Twitter handle, “Floods in Assam is a cause of worry for all of us. I express my sympathy with the affected families. Our party stands shoulder to shoulder with the people of Assam. Our thoughts are with the bereaved families.” 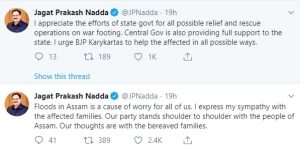 “I appreciate the efforts of state govt for all possible relief and rescue operations on war footing. Central Gov is also providing full support to the state. I urge BJP Karykartas to help the affected in all possible ways,” he further tweeted.

Union Jal Shakti minister Gajendra Singh Shekhawat on Tuesday carried out an aerial survey of flood situation in the state, visited the relief camps and interacted with the camp inmates.

Apart from taking stock of the magnitude of flood and the devastations it caused to the state, the union minister reviewed the flood management activities carried out by the state government at conference hall of LGBI Airport in the city in the presence of chief minister Sarbananda Sonowal.

As per the latest flood report of Assam State Disaster Management Authority, over 52 lakh people have been affected in 4663 villages of 30 districts across the state due to the worsening flood situation.

A total of 290 relief camps are operational in the state and a total of 405 relief distribution centres have been set up in the 30 districts.

A total of 1,47,304 inmates had to be lodged in relief camps due to the large scale destruction caused by the floods.

Youngsters, vote to save Assam this time: Congress leader Priyanka Gandhi in Lakhimpur