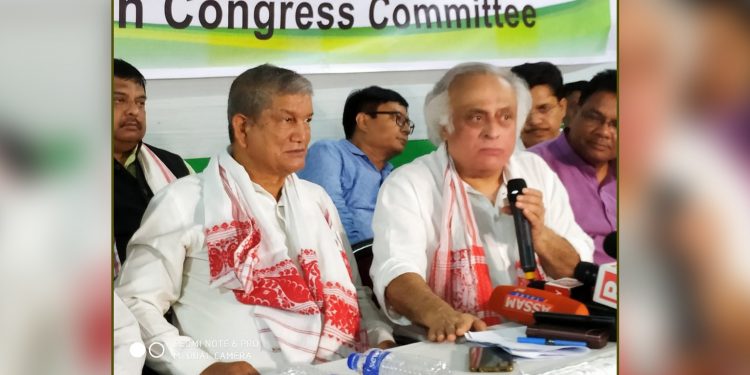 Jairam Ramesh and other Congress leaders in Guwahati on Wednesday. Image: Northeast Now

Senior Congress leader Jairam Ramesh on Wednesday said that the ruling party is misleading people on Article 370 and Article 371.

“Abrogation is only an insult to Sardar Patel,” the former union minister reiterated.

“The BJP is also misleading people about Article 371 in the Northeast. It is a lie that Article 371 provides protection to states like Nagaland and Sikkim,” he said.

“If Article 370 is temporary, Article 371 is also temporary. It’s wrong to say that Article 371 will protect the people of Northeast,” he added.

“The BJP is misleading the people,” Ramesh reiterated.

The senior Congress leader also slammed the BJP for its economic policies.

He said that the Congress is also opposing the privatization of banks, Numaligarh Refinery Limited and Bharat Petroleum.

“The Congress governments have built the public sector undertakings in last 70 years,” he said.

“Whatever PM Narendra Modi claims, the reality is that there is no investment, no jobs, and economic has halted,” he said.

“Congress will continue to oppose the wrong economic policies of the BJP government,” Ramesh added.