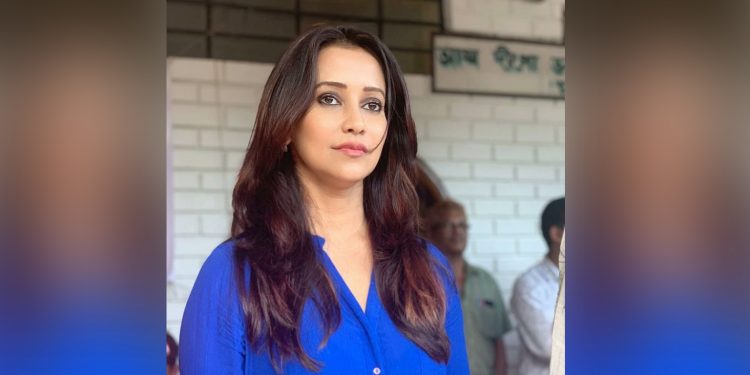 Assamese actor Barsha Rani Bishaya from Saturday evening has been severely abused in social media for her stand against the Citizenship (Amendment) Act (CAA).

Sharing some of her personal photographs on Facebook, a number of users have called her fake and said she is not worthy to be a part of the protests.

“Look at this fighter who has been fighting for the protection of Assamese language and culture. During the day she comes with fiery speeches and at night she parties around,” read a Facebook post.

The user shared some photographs of the actor where she was seen sharing some fun time with her friends and families.

The user further commented on her dress and said, “A person who wears western clothes how can claim to be a fighter fighting for the Assamese language and culture?”

“She cannot be a role model to the students as she herself indulges in things which are bad for the upcoming students of the state,’ he further wrote.

The user, however, removed the post on Sunday afternoon after he was criticised for his posts.

Another user, without naming the actor directly, launched a scathing attack on her personal life.

“I pray to the almighty to give her strength so that she can speak openly about the pain she is going through as her anti-CAA protests are nothing but camouflage and she is seeking personal vendetta here against one special person,” the user wrote.

“Your shrilled voice is annoying to the ears. Why don’t you directly confront your special person and resolve your personal issues instead of shielding it behind the name of protests,” he further wrote.

He also did not mention directly about the “special person” he was referring to but gave enough hints as who the person might be.

“You are a bad actor and you know that and now you are acting in the rallies and trying to fool the people, especially the young minds,” wrote another user.

These and several other posts have taken Facebook by storm and several users have come in support of the actor and lambasted those who have abused the actor.

“I condemn the posts trolling Barsha Rani Bishaya. Such acts only show their hollowness of mind and lack of logic to counter the actor,” wrote a journalist of a local satellite channel.

“Such users should be booked by the police for tarnishing the actor’s image,” said Vedanta Goswami, a resident of Tarun Nagar area of Guwahati while speaking to Northeast Now.

“CAA supporters have every right to support but they don’t have the right to attack someone at a personal level. I will like the police take action, such users,” he added.

“I have reported several such posts to Facebook and I have urged my friends to do the same,” he added.

“When people are out of logic, they stoop to such low,” he reiterated.

Barsha Rani Bishaya has been a prominent face in the protests against CAA in Assam and has been standing shoulder-to-shoulder with the people agitating against the Act.

The artiste fraternity has been also staging cultural protests against CAA across the state.

Actors, singers, and musicians have come out in large numbers and spoken against CAA and have demanded the government to scrap it immediately.