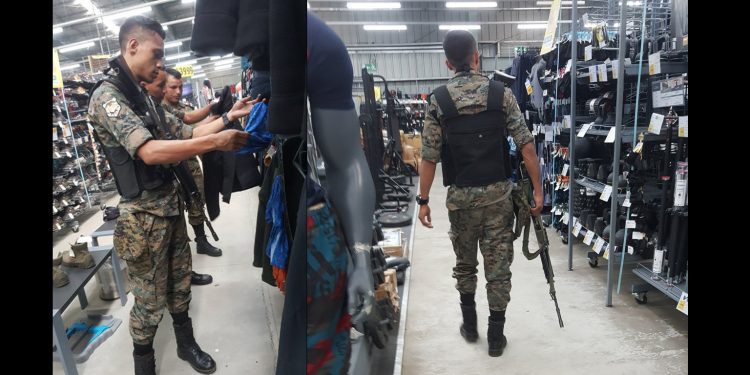 A large number of sports-fanatic kids were caught edgy on Sunday in the Decathlon sports store in Guwahati.

As the kids were busy running from one section to another, to pick their sports gear of choice, suddenly they found some automatic gun-toting “bloodcurdling” people descending in the store.

Most of the kids, in fear, ran helter-skelter, and all of them immediately rushed towards their respective parents for help.

“Who are these people? Why are they here?” a small girl, almost in her tears, questioned her mother.

Actually, the gun-toting “bloodcurdling” people were SF 10 commandos of the Meghalaya Police, and they had also reached the Decathlon sports store for quick shopping.

Decathlon, the largest sporting goods retailer in the world, has a store at Azara, near the airport in Guwahati.

Most of the tiny tots in the sports store definitely mistook the deadly-looking commandos for some kind of killers or militants.

Dressed in camouflage combat uniform, and with their bullet-proof jackets on, the SF 10 commandos in the Decathlon sports store actually looked “dangerous”.

The SF 10 is the elite force of Meghalaya Police, raised in October 2016 to fight militants in the hostile Garo hills districts.

The first batch of Special Force 10, there was 223 commandos and 113 rangers, and all of them are armed to the teeth.

Within months of deployment in the insurgency-ravaged Garo hills of Meghalaya, the SF commandos successfully eliminated the Garo National Liberation Army (GNLA).

Sohan D. Shira, the commander-in-chief of GNLA was also gunned down by SF 10 commandos on February 24, last year at Samanda in East Garo Hills district.

In fact, the killing of Sohan D. Shira was the end of GNLA’s militancy in Garo hills, and the credit, of course, goes to the SF 10 commandos.

It is surprising as to how the security guards of the Decathlon allowed the SF 10 commandos to take in their automatic rifles inside the store.

“We could not tell them anything. They practically barged into the store after getting out of the vehicle,” a security guard at the Decathlon store, said.

The staffs in the sports store also could not gather enough courage to tell the automatic gun-toting commandos to leave their lethal weapons outside.

And, as a result, the fearless commandos caught more than two-dozen tiny tots panic-stricken inside the Decathlon sports store.