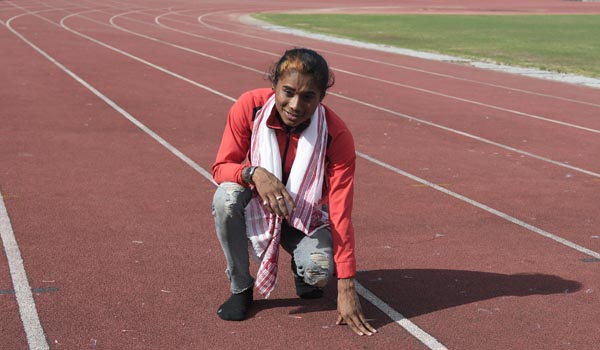 A report appearing in the The Telegraph stated that sprinter Hima Das will head to her native Kandhulimari village in Assam’s Nagaon district on Tuesday for the first time since June to spend time with her family and friends – and eat home-cooked food.

The report further quoted Hima as saying, “It has been a while since I left home. It has been practice, practice and practice and participation in high-voltage competitions. I need a break to recharge my batteries, meet friends and family and enjoy home-cooked food like maas tenga (sour fish curry). I also want to thank everyone for their wishes and blessings. In fact, I am indebted to the people of Assam and all my well-wishers,” she said during a media interaction at Sarusajai sports complex here on Saturday.

‘Track Queen’ Hima reached Guwahati on Friday to a rousing welcome for her medal-winning feats in the world under-20 championships at Tampere in Finland and the Asian Games in Jakarta.

Hima said she had signed a two-year contract with IOS, a sports management firm, for endorsements. “If I had not come out from my village, nothing like this would have happened. Even in Jakarta, I was inspired by the people who tied gamochas around their heads and cheered ‘Run Hima Run’. My support group Mon Jai has played a big role in my success,” the ‘Golden Girl’ said. Hima “admires” Sachin Tendulkar and Lionel Messi.