Pansy Brahma from Assam has brought laurels to the state and the country by winning the Best Actress award at Big Sound International Film Festival, Canada 2020.

Brahma has been honoured with the title for her role in the movie ‘Dusk’.

The movie is directed by Ujjal Paul.

The story has also been written by the director himself. 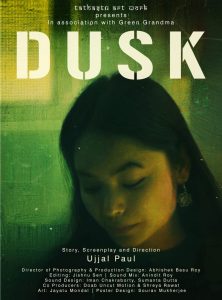 The photography & production design has been directed by Abhishek Basu Roy.

Jishnu Sen is in editing, Anindit Roy is in the sound mix while Iman Chakraborty and Sumanta Dutta are in the sound design of the movie.

The movie has been produced by T Art Work in association with Green Grandma.

The movie, featuring Pansy Brahma and Manoj Kar in the lead role, is about the life of a sex worker.

The monotony in the life of a young Nepalese sex worker from Asia’s largest red-light area breaks when she goes out with her intimate client, only to realize that she has to go back to the brothel which is her reality now.

Pansy Brahma plays the character of the sex worker residing in the red light area of Kolkata.

Pansy has acted in different movies including ‘Jwlwi-The Seed’ which directed by Rajni Basumatary.