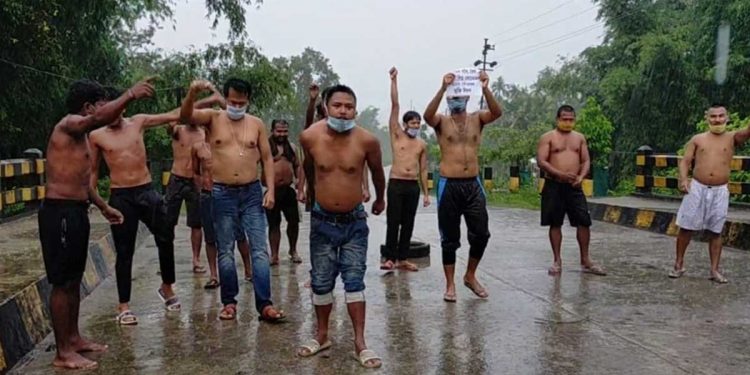 Demand the immediate release of Akhil Gogoi, several youths in Digboi’s Balijan came together and staged a semi-naked demonstration on a bridge along Digboi -Duliajan road.

The youths shouted slogans against the state government and demanded the immediate release of the jailed peasant leader and his colleagues.

Alleging the government of adopting a lackadaisical attitude towards the deteriorating health condition of Akhil Gogoi in his 200 days of jail period, the agitating youths said that the leader was denied of advanced health care treatment when it was much needed.

“We want Akhil Gogoi back in the same state of health as he was seen during the anti-CAA protests,” the agitators said.

“We will hit the streets if anything goes wrong with the peasant leader,” they added.

“The state government should release Akhil Gogoi and other KMSS leaders immediately and withdraw every charge foisted against him,” the infuriated youths shouted.