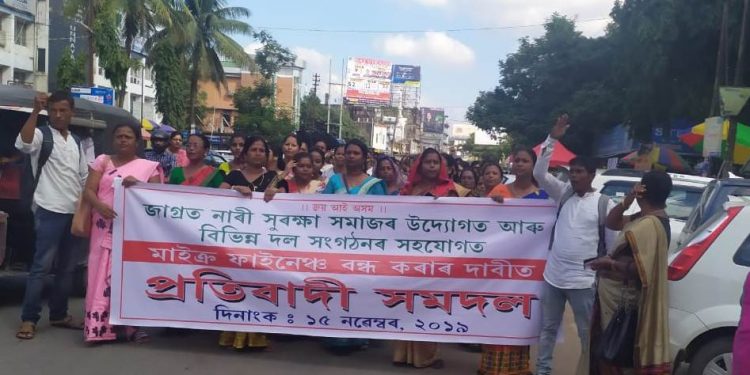 The organisation demanded an enquiry into the workings of microfinance companies.

Several organisatios under the banner of Jagrata Mahila Suraksha Samaj staged a protest against microfinance companies which they alleged had ruined the rural economy.

The Samaj demanded that these microfinance companies which included Bandhan Bank, Ujjiwan, Janlakshmi, RGVN among others should be banned from operating in Assam.

The organisation demanded an enquiry into the workings of such microfinance companies and banks which it said was not transparent and sought that they be monitored properly.

They further sought that the agreements with the creditors which was written in English should be made in Assamese and given to the loanees.

Alleging that these companies were charging exorbitant rates of interest on loans and that their accounts checked for malpractices, they said the extra interest which had been collected should be returned.

The Samaj further said that every week women who had taken loans from these companies were being harassed.

They alleged that the companies were resorting to any means to extract the interest and original amount.

The affected women loanees further said that several among them had been reduced to penury being unable to pay back the loans and that they had to sell off land, house or other valuables.

The Samaj demanded that these women should be given back their property.