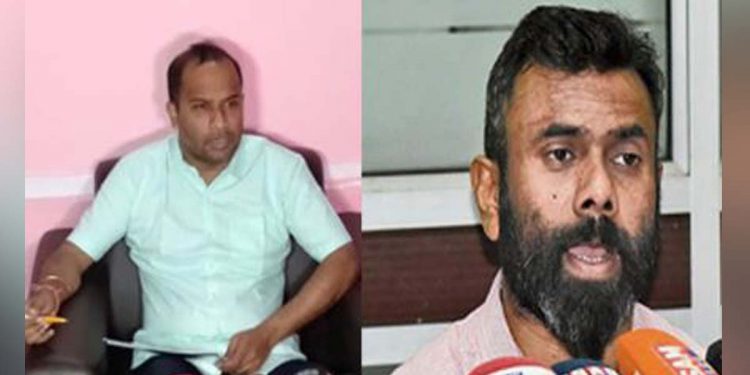 Following the exit of Rup Jyoti Kurmi, Assam Congress is worrying about the future of its incumbent leaders, including MLAs fearing that they might emulate Kurmi’s footsteps and join Bharatiya Janata Party (BJP).

In Barak Valley, only one potential Congress leader is in news. He is Kamalakhya Dey Purkayastha —he represents Karimganj North in Assam Assembly.

Dey Purkayastha is believed to be very close to Kurmi.

Though umpteen number of times Dey Purkayastha has said “I will remain in Congress till my last breath”, but you can never predict future.

In politics, such statements certainly can’t be accepted as an insurance cover. Till a few months back it was not known that Kurmi will be joining BJP. Today he has embraced the saffron robe.

However,, All India Mahila Congress president and former Silchar MP Sushmita Dev has sounded optimistic and told that Cachar Congress is intact and nobody will jump the ship.

Before making this statement Dev should have realized that in this term Sarbananda Sonowal is not at the helm of affairs rather the man in charge is Himanta Biswa Sarma, who is known for his shrewd political skills.

His defection to BJP has cost Congress not only Assam but the entire Northeast. Rahul Gandhi completely failed to assess Sarma’s political skills and decided to side with his Mamma’s trusted lieutenant late Tarun Gogoi.

Sarma has already asked the fulcrum of opposition Congress leaders to join BJP since he wishes to fulfill the dream of Narendra Modi’s ‘Congress mukt Bharat.’

In a vibrant democracy opposition parties have an important role to play. Unfortunately in Modi’s tenure the opposition is divided and above all BJP’s arch rival Congress is trying for political survival.

From North to South and East to West — Congress is nowhere. Its political graph is declining continuously.

Having said that Cachar Congress is safe for two reasons — first and foremost in Barak Valley there is no such dynamic Congress leader who can help BJP politically.

Moreover, BJP has a sound base in Barak Valley and it doesn’t need any Congress turncoat to polish its political fortune in this part of South Assam.

BJP’s policy of poaching and hiring leaders from rival parties has backfired in West Bengal. Mukul Roy’s return to Trinamool Congress (TMC) is an instance in point.

In Northeast, apart from Tripura BJP has hired leaders from Congress and other regional parties. How far this formula will work time alone can tell.

But yes Congress will have to put its house in order before the next general elections. It is really surprising that till now the party has not elected its regular national president.

Party veterans like Ghulam Nabi Azad and Kapil Sibal have already raised this issue time and again. But Sonia is not interested to hand the baton to a non- Gandhi.

Probably, she is waiting for Uttar Pradesh’s election. Priyanka Gandhi is toiling in the biggest state with a hope that Congress’ political hibernation will end in 2022.

This is unlikely to happen because Congress neither has an organization nor a bankable leader who can turn the tide and give Yogi Adityanath a run for his money.

Kurmi is not the first Congress leader who has defected to BJP. Neither will he be the last. Who knows in 2024 another Congress bigwig might join the saffron brigade.

Congress is a leaderless party. Factionalism is reigning supreme. It’s known to one and all that Kurmi didn’t support Congress’ move to stitch an alliance with All India United Democratic Front (AIUDF).

Rakibul Hussain is also known to be an opponent of Kurmi in Congress and he didn’t leave any stone unturned to sideline this leader from tea belt.

Despite Dev’s comment of ‘all is well’ in Cachar Congress—even she too realizes that her party is not in a sound shape and on any given day many Congress members might change the bogey.