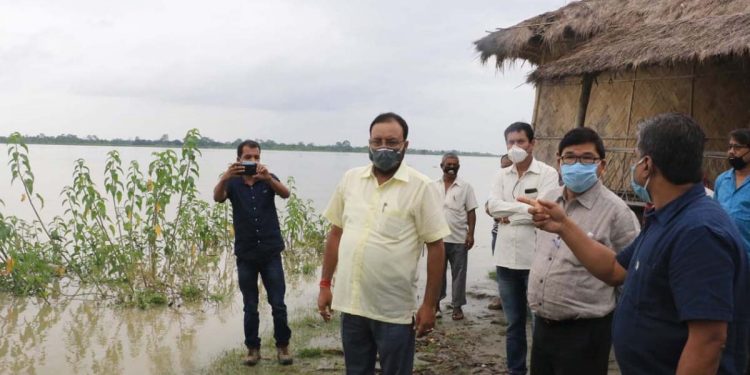 Assam water resources minister Keshav Mahanta on Saturday asked the district senior officials of his department in Jorhat to prepare scientific plans to contain large-scale erosion in the district.

The minister took stock of the massive erosion at Neolgaon to the north-west of Jorhat and directed the executive engineer of Upper Assam Division (Investigation) of the water resources department to prepare a scientifically-based plan to tackle erosion at the place.

A district official said Mahanta held discussions with senior officials at the Jorhat Circuit House and asked them to ensure that the people were protected from floods and erosion.

Accompanied by the officials, Mahanta visited the Kokilamukh area on the bank of river Brahmaputra in Jorhat and inspected the area.

He also visited the Shanti Ashram in the vicinity.

The minister announced that a groyne or a spur will be constructed at Kokilamukh for protection of the area from the river and asked his department’s officials to prepare a plan for the same.

The official stated that Mahanta during his visit here inspected the construction work of the retaining wall for protection of the town at Royal Road area along river Bhogdoi.

The minister, who came from Sivasagar, on his way, made a stopover at Kawoimari area of Jorhat district to see the seepage caused at the embankment of river Janji and advised the officials of water resources department to work out urgent steps for construction of a retaining wall at the area.