Assam: US agri scientist warns of catastrophe if food production not increased 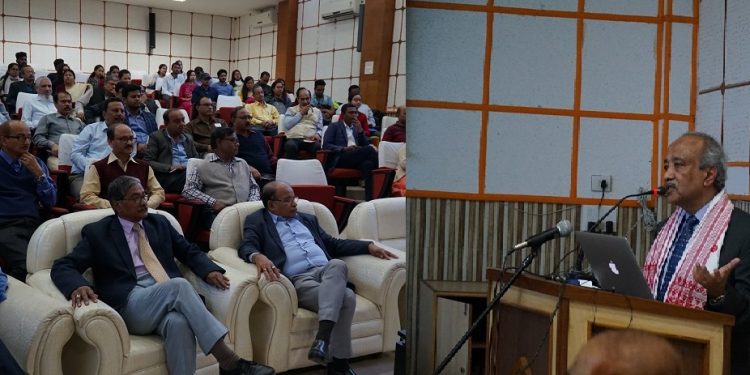 Professor Madan Kumar Bhattacharyya, Lowa State University, of Lowa in USA, warned of a catastrophe if food production was not commensurate with growth of global population.

Addressing the first Dr G R Das memorial lecture at the Academic Centre, Assam Agricultural University in eastern Assam’s Jorhat, Bhattacharyya said by 2050 the population in the world would be 9.8 billion people.

Emphasizing on the importance of plant breeders in the second Green Revolution, Bhattacharyya said there was need to mitigate this gap.

A student of Dr G R Das, Bhattacharyya said at present there was a 25 to 30 per cent food wastage and that population growth, climate and other environmental factors like droughts and floods were some of the reasons for the average 30 per cent increase in annual food production not being adequate to meet the challenge for the increased food requirement.

The professor who is also a former associate scientist of the Nobel Foundation said that genetic gain in crops was a sure indicator of breeding success and should be taken up in right earnest to meet the needs of the 21st century.

Some of his other suggestions were avoiding any further expansion of biofuel production, reduction of spoilage in crop production, shifting diets of high meat consumption towards plant-based foods and improving women’s access to education and healthcare to check population growth by acceletating voluntary reduction in fertility levels.

The lecture was organized by the Department of Plant Breeding and Genetics and the Regional Agricultural Research Station, Titabar, in memory of Dr G R Das, a former pioneer scientist in plant breeding, especially rice, of AAU, who passed away last year.

In 2017 university named a variety of rice, Gitesh, in  his honour.

Late G R Das had evolved several high yielding rice varieties of rice and was a name to reckon with in rice research.

Earlier, Dr T Ahmed, chief scientist RARS, Titabar and chairman of the organizing committee of the lecture, in the welcome address said late Das had laid the foundation of the Titabar Regional Agricultural Research Station ( RARS) in 1969 and had retired as chief scientist from the Karimganj RARS.

AAU vice-chancellor (in-charge) Dr Ashok Bhattacharyya, also addressed the gathering and said he hoped that this memorial lecture would be an annual event.

Dr Bishakha Das, daughter of Dr G R Das, gave an insight into her father’s life and recalled that her father was also a flutist liked to sing songs.