Another ULFA flag recovered at Nazira in Sivasagar district 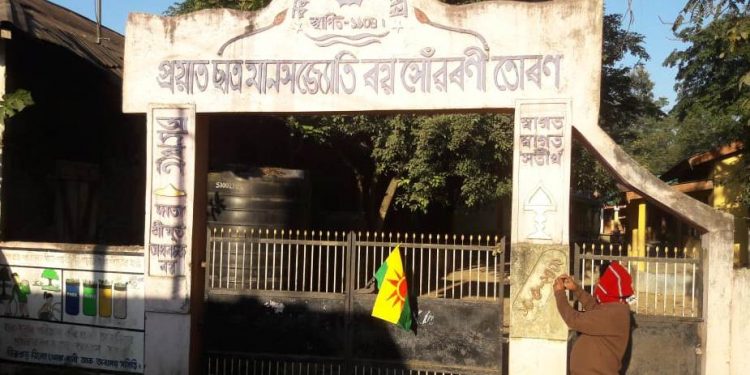 A flag of banned outfit ULFA (I) was found during 12-hour NESO shutdown on Tuesday in upper Assam’s Dibrugarh district.

A flag of banned outfit ULFA (I) was found during 12-hour NESO shutdown on Tuesday in upper Assam’s Dibrugarh district.

The flag was spotted by locals at the entrance gate of Barbaruah LP School in Dibrugarh town and informed the police, who immediately removed it.

The school is located at a distance of 500 meters from Barbaruah Police station.

Dibrugarh SP Gautam Borah said it was the handiwork of some miscreants.

“The miscreants have stitched the flag and kept on the entrance gate of Barbaruah LP School. But it was not looked exactly like ULFA (I) flag. We have seized the flag and started investigation,” Borah said.

A top Assam police had earlier said Citizenship (Amendment) Bill has given a “fresh lease of life” to the ULFA (I).

Police said they are keeping a strict vigil on the activities of miscreants.

“Recently, many youths from upper Assam had joined in the ULFA (I) but later many of them have returned. They were misguided by the linkmen of ULFA (I) who are working on behalf of the proscribed militant group. We are keeping a strict vigil on their activities,” said a police official.

Meanwhile, another ULFA flag was recovered at Nazira in Sivasagar district.

But it is not known who had planted the flag.

In the flag a dialogue was written in Assamese language – “Aami Asomar thalagiri raaijar lagat aso” (“We are with the indigenous people of Assam”.