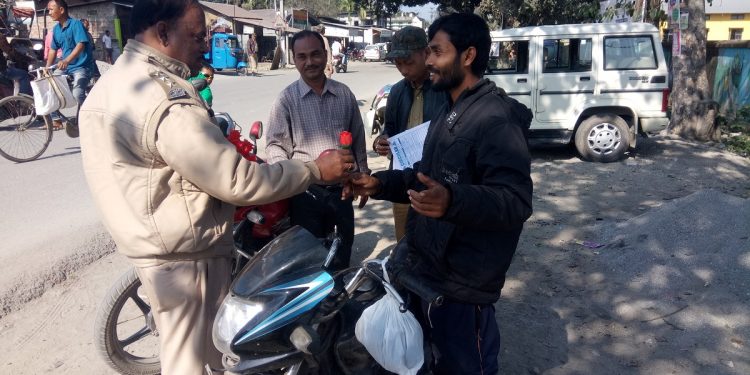 In a bid to promote safe driving, traffic discipline and awareness on the Motor Vehicle Act 2019, Assam’s Udalguri District Transport Office officials conducted a series of awareness drive on road safety as a part of road safety week from January 11 to 17.

A free eye-check up camp was also conducted at Tangla Motor Sramik Association office in the premises of Bordoloi Bhawan in Tangla town of Udalguri district on Wednesday.

Motor Vehicle inspector, Asgar Ali Ahmed attending the event said, “After the new Act came into force on September 1 last year, we have been conducting awareness drives. The MV Act is not a revenue-generating exercise rather emphasizing safety of the people is our prime concern and the act was also amended concerning the growing road accidents.”

The road safety drive was conducted across nooks and corners of Udalguri district including Udalguri, Mazbat, Kalaigaon, Tangla.

The district transport officials also rewarded all those who followed traffic rules with a rose.

The officials, however, didn’t impose penalty on the offenders and requested the commuters to follow the traffic rules in letter and spirit.

“We are urging people to wear helmets while driving two-wheelers after all human life is a previous entity,” said, Bhergaon sub-divisional police officer, Nirmal Ghosh.