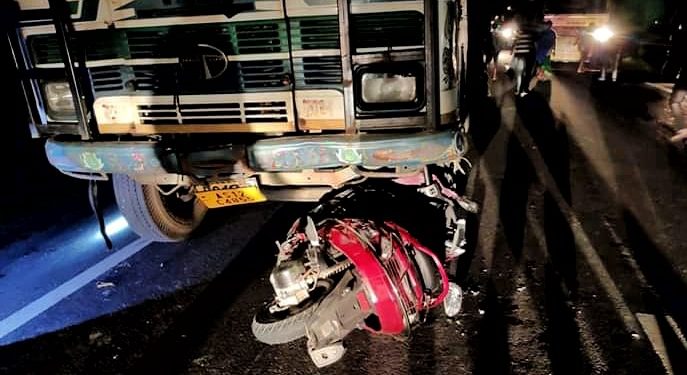 The scooty which hit the stranded truck in Gelabil near Orang over the NH-15 in Udalguri on November 20, 2019. Image: Northeast Now

Hours after the accident that claimed eight lives, two separate road accidents were reported from the same location at Gelabil area near Orang in Assam’s Udalguri over the NH-15 on Wednesday evening.

In the first accident at about 5:30 pm two youths Kuldeep Sahariah (28) hailing from Nichlamari and Chandan Koch (35) hailing from Gelabil were injured after the motorbike they were travelling hit a stranded Maruti Alto vehicle.

They have been rushed to Mangaldoi Civil Hospital in Darrang.

In the second accident, a person lost his life after a couple with a baby travelling in a Hero Maestro scooty (non-registered) hit a stranded truck (AS-12-C-4855) at about 7 pm which was loading the materials from the truck which was hit by the Ertiga vehicle early morning.

The deceased was identified as Arun Narzary.

The child is, however, safe.

The infuriated locals have blamed the police administration for the lack of barricade in the area as the two lane National Highway with haphazard  stranded vehicles causes lot of inconveniences to commuters.

As per sources, Udalguri police administration also took stock of the situation and held a close door meet at Orang police station in the evening.