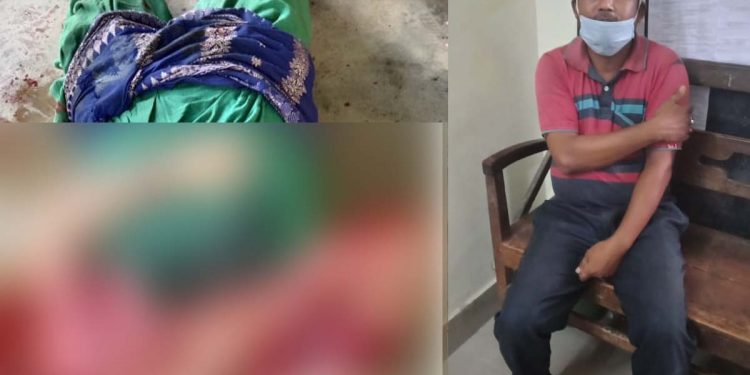 The headless body of a woman and (right) her husband. Image credit - Northeast now

Within 48 hours, two persons including a woman were murdered in Kokrajhar district.

A woman, identified as Bimola Basumatary alias Gaide Basumatary of Sutharpara village under Kokrajhar police station, was murdered on Saturday evening, by miscreants at her residence where she used to live alone.

The police recovered the headless body of Gaide from her house on Sunday.

Her head is yet to be recovered. The body has been sent for post-mortem by the police.

The villagers told the visiting reporters that Gaide Basumatary was the second wife of Satiram Basumatary, a father of four children.

She used to live alone at her Sutharpara home while her husband lives with his first wife at Chariali under Runikhata police station of Chirang district along with four children.

The villagers said Satiram, who is known as ‘Doctor Gwran’ in the locality, has been running a medicine shop at Chariali.

Gaide got married to Satiram as his second wife about a year ago.

Gaide, who hailed from Shantipur of Chirang district, was brought to Sutharpara by Satiram.

But he left her alone at Sutharpara as he uses to stay with his first wife at Chariali.

The villagers said, “Satiram used to visit Sutharpara now and then but always had suspicion over his second wife if she had any link to other males.”

The villagers and Gaide’s neighbours told the media that Satiram used to visit his home at Sutharpara only to observe if his wife is keeping relation with someone else.

“He used to keep his car somewhere in the middle of the village and walks home quietly to check his wife,” said a neighbour.

The neighbour said on Saturday at about 8 pm, she heard some persons knocking at Gaide’s gate calling her ‘Madwi (Aunt), open the gate” and she was murdered when she came out of her home with sharp weapon.

She also said since there was no one in the home, the villagers noticed the headless body of Gaide only in the morning on Sunday.

Many villagers suspected the role of Gaide’s husband behind the murder.

Kokrajhar police are examining the case and investigation is on to unearth the truth.

Police have detained Satiram in connection with the case.

In another incident, one Bikas Limbu, son of Purna Bahadur Limbu of Limbupara village under Serfanguri police station in Kokrajhar district was murdered by his domestic helper Birsa Lakra on Friday evening.

The body of the victim was recovered on Saturday.

Sources from Kokrajhar district committee of AGSU said Bikash was taken away by domestic helper Birsa to river Longa for catching fish on Friday at around 7 pm.

But on their way to the river, Birsa attacked Bikash with a sharp weapon.

After killing him, Birsa had thrown Bikash’s body to river Longa.

The accused surrendered himself at Serfanguri police station on the same night with the weapon with which he killed Bikash and the victim’s body was recovered the next day.

The district AGSU has demanded proper inquiry into the crime as it could be a deliberate murder with involvement of more other parties.