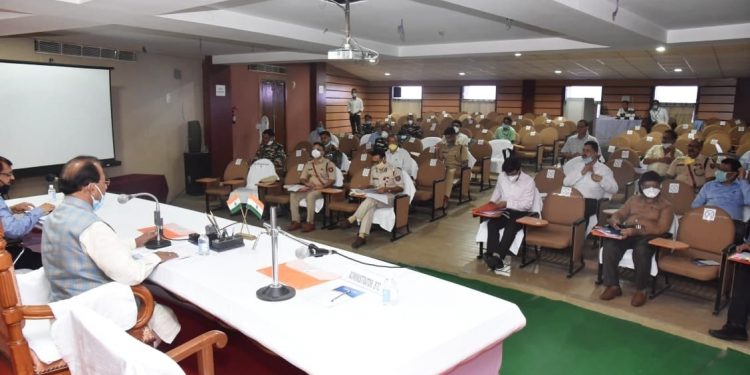 The Governor heard public grievances and asked administrative functionaries for their immediate redressal.

In his second visit to Kokrajhar after taking over BTC administration, the Governor heard the problems of people coming from different walks of life including representatives of social, cultural, religious, political, linguistic and student organizations and directed BTC administrator Rajesh Prasad to take steps for their immediate redressal.

It may be noted that the Governor immediately after taking over the reign of administration of BTC, took special initiatives like holding public durbar in BTAD areas to take fruits of governance to every residents.

He ordered all the deputy commissioners in four BTAD districts and SDO (civil) to hold public durbar in their respective jurisdiction and take steps for solving the problem.

He asked the administration to initiate every effort to ensure citizen friendly governance in the BTAD by listening to the citizen and taking responsive approach for citizen responsive governance.

Moreover, time-bound governance with time line for each activity has to be ensured with decisiveness and resoluteness in action, the Governor added.

Meanwhile, the terms of Village Council Development Committee(VCDC), Central Selection Board and Territorial Constituency Level Co-ordination Committee(TCLCC) are co-terminus  and automatically get dissolved with the end of the term of the council.

The Governor has received several grievances regarding the misappropriation of the job cards issued under MGNREGA.

He said the people living within the jurisdictions of VCDC should not suffer and therefore  asked the administrator to designate the respective BDOs to take care of people’s welfare that were primarily looked after by the VCDCs.

The Governor pointed that as per rules, the job cards should remain in the hands of the beneficiaries and asked Administrator to get hold of all the job cards from the VCDC functionaries and hand over the same to them within a week.

Further, four out of nine Municipal Boards whose term was over have been dissolved and their functions shall be looked after by the executive officers.

The Governor asked Kokrajhar deputy commissioner to prepare a list of all the migrant workers in the district and map their skill sets to employ them in different vocations.

He also asked the administrator to allot job cards to the migrant workers who have come back to different districts of BTAD areas post COVID-19 induced lockdown.

During his day long stay in Kokrajhar, Prof Mukhi made a visit to the Municipal Market and hailed the efforts of the administrator and the principal secretary who under the direction of the Governor  initiated ‘I love Kokrajhar’ campaign and shifted the roadside vendors of Kokrajhar main bazaar to the three storied building of bi-weekly Bazaar of Kokrajhar town.

It is noteworthy that the building was made under Non Lapsable Central Pool of Resources (NLCPR) scheme with 90 per cent central funding.

This effort by the administrator and the executive officer of Kokrajhar Municipal Board enabled the roadside vendors to have a permanent place to sell their produce thereby reducing greatly the congestion and unhygienic conditions prevailing in the heart of Kokrajhar town.

It is to be mentioned that because of the rampant tree felling, the Governor has  put a blanket ban on any kind of tree cutting and started a massive plantation drive in BTAD under the project ‘Hariyali’ where 40 lakhs of plants inclusive of flowering, fruiting ,medicinal and other plant varieties are to be planted.

In this regard, it may be noted that under ‘Hariyali’ project so far altogether 12,92,727 saplings have been planted in BTAD including 9 ,65, 568 in  Kokrajhar. In line with that, the Governor planted saplings in Bodoland University campus today. 478 saplings were planted today in presence of the Governor.

Prof.Mukhi held a high level meeting with the administrator, principal secretary, IG, DIG, deputy commissioners, superintendents of police of the BTAD, PCCF, Additional PCCF, Army, CRPF and SSB and asked them to work in a co-ordinated manner for the welfare of the public and take utmost care so that no laxity creeps in the administrative machinery which might act as a deterrent in ensuring a citizen friendly administration.

He also reviewed the prevailing law and order situation and the security issues of the district.