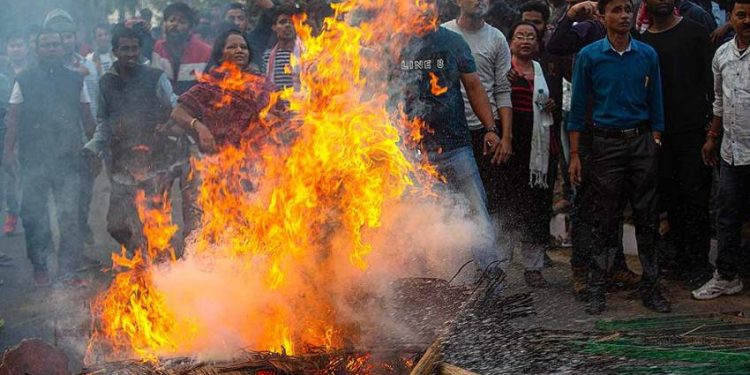 Amid protests against the Citizenship Amendment Act (CAA) in upper Assam, two persons were arrested by the police on Friday from Chabua in Dibrugarh district on charge of burning down the house of the local BJP MLA during the recent anti-CAA protest.

Chabua MLA Binod Hazarika‘s residence was set ablaze by a group of angry protesters on December 12 a day after the Citizenship Amendment Bill was passed in the Rajya Sabha.

Chabua, which is also the birthplace of chief minister Sarbananda Sonowal had witnessed the highest cases of violence in the recent anti-CAA protests with protesters resorting to arson and vandalising the local railway station, circle office, post office, bank, bus counter and several government properties.

The two persons arrested by the police were identified as Bidyut Baruah and Bikash Baruah.

Both of them are brothers. As the news of their arrests spread, locals blocked the Hatiali road at Chabua for over an hour seeking their release.

The locals also staged a demonstration in front of the Chabua police station while Jugal Baruah, a local BJP member resigned from the party in protest following their arrest.

“We have clear video evidences of them indulging in the arson act at the MLA’s residence. Both of them can be seen clearly in CCTV footage. Both of them have admitted their crime.  We have so far registered 79 cases and arrested 59 persons in Dibrugarh district for indulging in violence, arson and vandalism during anti-CAA protests. All of them have been sent to jail and action will be taken against them as per law,” Dibrugarh SP Sreejith Tiraviam said.

Members of the Silpi Samaj, Asom Jatiyatabadi Yuva Chatra Parishad, All Assam Tai Ahom Students’ Union participated in the rally along with thousands of people from different walks of life.

Similarly, the All Assam Gorkha Students’ Union coinciding with its 44th foundation day took out a silent procession in Duliajan town in Dibrugarh district on Friday demanding scrapping of the CAA.