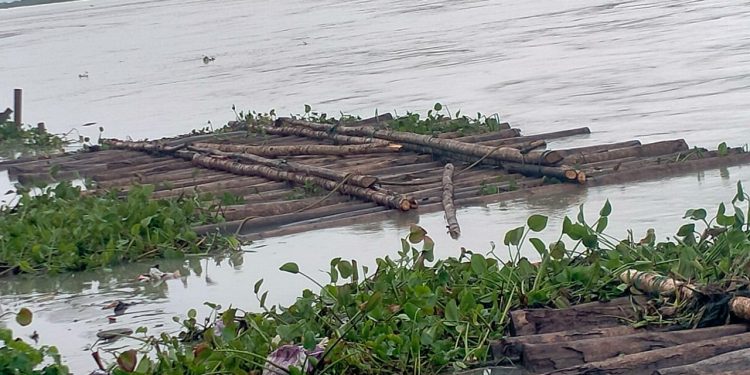 Timber rafts floating on the waters of the Brahmaputra in Dibrugarh

Sources said timber smugglers continue to use the riverine route of the Brahmaputra river system to continue with their illegal timber business.

“A section of forest department personnel are hand in glove with the timber mafias due to which, they have been able to continue with the illegal timber trade in broad daylight,” said a source.

Brahmaputra. In a joint operation with police, we have seized the illegal timber,” said Dibrugarh divisional forest officer Pradipto Baruah.

“We have seized three rafts with timber floating on the Brahmaputra river. In a joint operation with the police we seized the illegal timber,” said Dibrugarh divisional forest officer Pradipto Baruah.

“The raft was floating from the Arunachal Pradesh side,” he said.

Sources said these logs were either brought from Arunachal Pradesh or the Dibru Saikhowa National Park by the timber mafias through the riverine routes to avoid detection by the forest department or authorities concerned.

Many saw mills operate in Dibrugarh and most of them are involved in illegal means to make money.

“During monsoon, many rafts with logs are transported to Panchali Ghat and timber smugglers took away the logs from the ghat,” a source said.