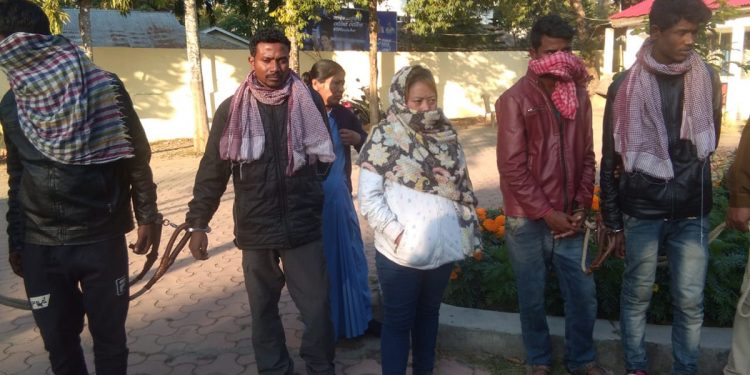 The Tezpur police in Assam’s Sonitpur district arrested a total of 5 car-lifters including a woman and also recovered a stolen vehicle from their possession.

According to police sources, the car-lifters lifted one Bolero pick-up van with the bearing number AS-25 DC-2612 on the way to Kaliabor in Nagaon district to Itanagar, the state capital of Arunachal Pradesh, in between Bhomoraguri bridge and Solung on January 4 last.

The arrested car-lifters have been identified as Rajesh Baguara and his wife Aleb Sang from Dimapur; Jinnat Ali from Dhekiajuli in Sonitpur, Md. Ajimuddin from Khanamukh in Sonitpur and Nur Mahadmad from Tupia in Sonitpur.

It may be mentioned that in a successful drive, the Barpeta police arrested 3 vehicle lifters, 2 from Bandhali under Tarabari police station area and one from Belortary area under Barpeta PS.

The police also recovered 1 Bolero Pick-up van which was stolen from Hanhchara under Barpeta police station on November 30, 2019 night.

Barpeta Police while sharing an image of the van on its Twitter handle said, “In one more successful drive, Barpeta Police arrested 3 more vehicle lifters (2 from Bandhali, Tarabari PS area & 1 Belortary, Barpeta PS) and recovered 1 Bolero Pickup which was stolen from Hanhchara, Barpeta PS on 30.11.2019 night.”