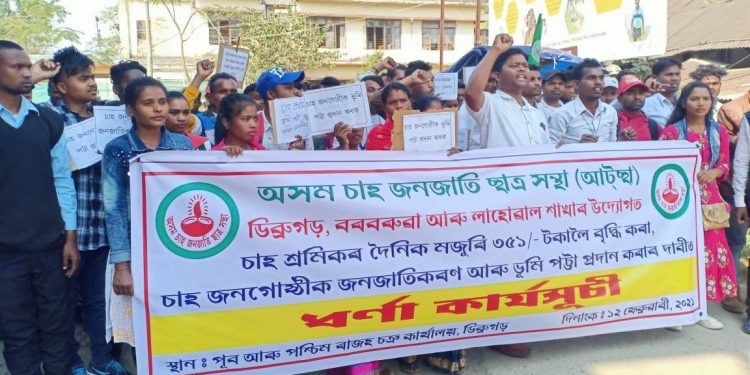 The members of Assam Tea Tribes’ Students’ Association (ATTSA) on Friday staged a protest in front of the Dibrugarh circle office demanding ST status for the tea tribe community and seeking an increase in the wage of tea workers.

The students’ body holding play cards and banners protested in front of the circle office to press for their demands.

The protesters raised slogans against the BJP government for not fulfilling the demand to increase the minimum wage of the tea workers.

“The BJP government had promised to increase the minimum wage of tea workers to Rs 351 but to date, they have not fulfilled their promise.

“The BJP government has promised this before the election to ‘woo’ the tea tribe voters. We are very dissatisfied with the government role and demand them to increase the minimum wages of the tea workers as soon as possible,” said Basant Kurmi, central organising secretary of ATTSA.

The tea tribe community in Assam constitutes around 20 per cent (70 lakh) of the state’s 3.5 crore population and play a crucial role in sealing electoral outcomes, both in the Lok Sabha and Assembly elections.

“ST status is a long pending demand of our community but the government is doing politics over the issue. We demand ST tag for our community before the assembly election in Assam,” said an ATTSA activist.

Assam finance minister of Himanta Biswa Sarma on Friday presented the state budget and told that the minimum wage of tea workers will be increased soon.