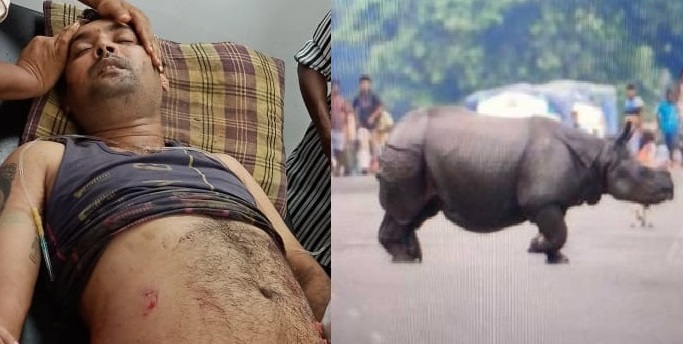 Joint up images of the injured video journalist and the rhino. Image: Northeast Now

Amid the devasting flood at Kaziranga in Assam, a video journalist was seriously injured by a rhino on Tuesday.

The video journalist Baskar Rajkhowa of a private news channel was attacked by the rhino when he was filming it that was taking refuse at the Hatikhuli Tea Estate.

The rhino had ventured out of the national park because of the flood.

Rajkhowa sustained serious injuries as the rhino got the better of him.

As the rhino charged towards him, he tried to flee, but the speeding rhino overpowered him and attacked him.

The injured video journalist was immediately rushed to the primary health centre at the tea estate.

After administering first aid, he was then sent to Jorhat Medical and Hospital for further treatment.

He has been associated with Prag News for quite some time.

Meanwhile, Forest officials have rushed to the spot to investigate the matter.