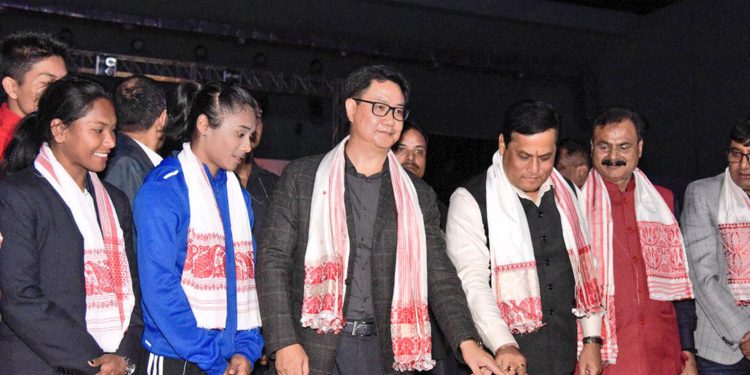 The third edition of KIYG is scheduled to be held from January 10 to 22 in Guwahati.

Assam Chief Minister Sarbananda Sonowal also accompanied the sports minister as the composite logo, players jersey, Mascots and the theme song of the third KIYG were launched as well.

The third KIYG will have two additional sports – cycling and lawn bowls. Over 10,000 participants from across the country will participate in the game which will hold a total of 451 medal events.

The launch ceremony was also attended by ‘Dhing Express’ Hima Das, Swapna Burman and Lovlina Borgohain along with a host of other dignitaries from the world of sport.

Addressing the gathering Rijiju said, “The Khelo India Youth Games is one of the most empowering initiatives of the Indian government.”

“It not only hopes to give a platform to youngsters from across the country to make a future in the sport but also to build India into a sporting nation,” Rijiju added.

“I invite every sports-loving and talented youngster to grab this opportunity and begin his or her journey towards excellence. Playing sport is also a great way to build one’s character and have a fitter body and mind,” he added.

“A record around 11,000 athletes and technical officials will participate in the upcoming 2020 @kheloindia Youth Games at Guwahati. Two new Games of Cycling and Lawn Bowls have been added at #KheloIndia2020,” Rijiju tweeted.

A record around 11,000 athletes and technical officials will participate in the up coming 2020 @kheloindia Youth Games at Guwahati. Two new Games of Cycling and Lawn Bowls have been added at #KheloIndia2020 https://t.co/aXJiYrpv3T pic.twitter.com/u3CT0sK5ar

“I am delighted to welcome the Khelo India Youth Games to Assam,” Sonowal said.

“The Games will surely inspire all the children in the state as well as the entire North-East region to take up sports and bring glory for themselves, our state and indeed our country,” he added.

The Khelo India Games was launched in 2018 to imbibe a culture of sports in the country.