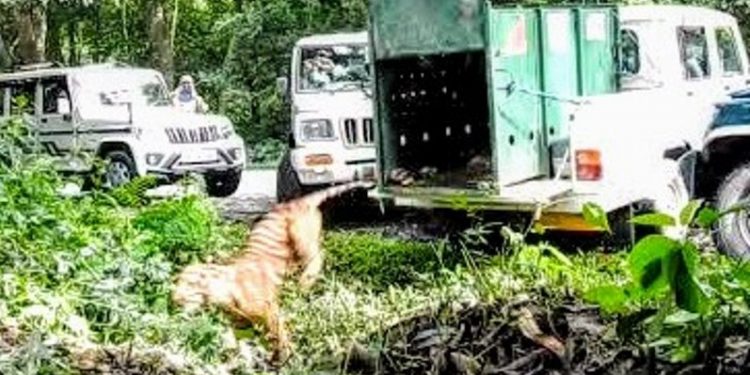 A tigress which was rescued from the residence of one Prabin Bora near Kaziranga National Park two days back was released into the wild on Friday.

The tigress was rescued from the residence of Bora at Baghmari region near the Bagori range of the national park.

On Friday, after administering necessary medical aid, the tigress was released by the authorities of Kaziranga National Park.

The tigress was brought in a cage on a vehicle and released by forest personnel.

The entire process was videographed which showed the big cat running into the wild after a few seconds of initial hesitation.

The tigress was one of the two big cats that had strayed out of the park on Tuesday to escape floodwaters.

While one tiger was driven away to higher locations in adjoining Karbi Anglong district, the tigress moved to a nearby village and spent the night in the kitchen of Bora’s thatched house.

The forest officials and veterinarians tranquilized the tigress on Wednesday afternoon, as they were apprehensive about its safety.

Later it was shifted to the Centre for Wildlife Research and Conservation (CWRC) located at Borjuri near the park.

Veterinarians and CWRC personnel conducted a thorough health check-up of the tigress and decided to release it back to the wild after they were convinced that the animal had not suffered any injury and would be safe on nature’s lap.

Earlier on Monday, another male tiger had come out of the park to escape floodwaters.

The animal moved back inside the park after spending a few hours outside.