In the second wave of Covid19, Assam for the first time reported more than 20 deaths due to the virus on Wednesday.

With these deaths, the toll of Covid19 fatalities in Assam reached 1,255 on Wednesday.

On Wednesday, Assam reported 22 Covid19 deaths, which is the highest number of fatalities in the second wave of the pandemic. 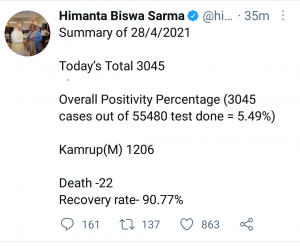 The Assam health minister informed that the new cases were confirmed out of 55,480 tests.

The overall positivity percentage of Assam stood at 5.49% on Wednesday.

The deaths were reported from 11 districts in Assam on Tuesday.
Assam reported a total of 3,132 new Covid19 positive cases on Tuesday.

A total of 1,313 cases were detected in Kamrup Metro district.