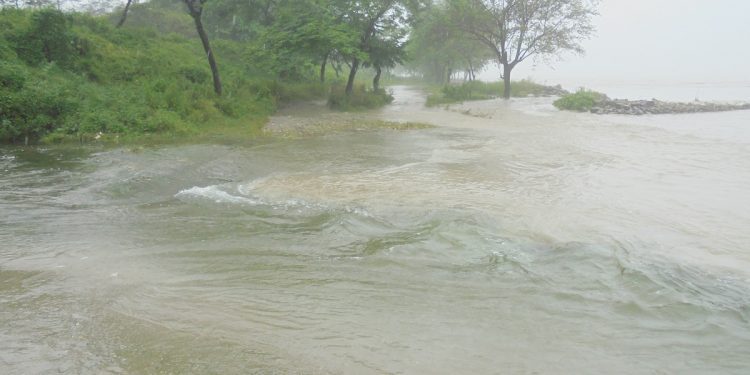 Dhemaji district of north Assam and bordering parts of Arunachal Pradesh have witnessed heavy to very heavy downpour for the last three days, bringing down the mercury level by several notches.

Non-stop rain in the region has stalled normal life in the region, while it has refilled the receding rivers and hilly streams.

Food and vegetable supply is on halt due to torrential rain, while it is severely affecting the business communities during the economic crisis caused by the coronavirus pandemic.

Also read: Central and Assam government failed to control flood in Assam, no relief to the people, says CPM

The swelling river due to torrential rain in the upper stretches has created flood fury in Dhemaji district.

Over 1.30 lakh population of Jonai, Sissiborgaon and Dhemaji revenue circles under the district have been affected by the third wave of flood.

The India Meteorology department (IMD) reports earlier predicted heavy rain in the north-eastern region including the State from July 10 to 21.

As per the IMD reports, the combination of monsoon trough shifting northwards and moist southerly/southwesterly winds blowing in from the Bay of Bengal has increased rainfall activities in north-eastern region for the days.

Mighty Siang river and other tributaries are swelling by the heavy downpour in the northern hill sites.

As per Water Resource department (WRD) report, Siang river, the major tributary of Brahmaputra river in Arunachal Pradesh is flowing above danger level at Yingkiong (303.10 m) and Pasighat (154.16) till filing of this report at 9.00 pm.

“The rising trend of Siang and other Arunachal rivers may create disastrous situation in Dhemaji and other districts in the downstream,” said WRD officials.