Gogoi was released from GMCH, hours after a special NIA court cleared him in a pending case 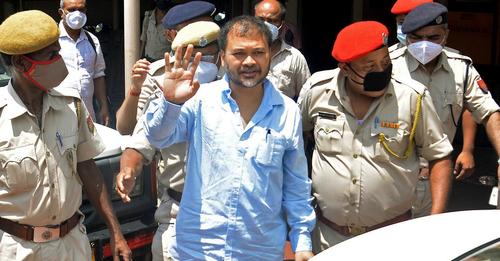 Raijor Dal chief Akhil Gogoi, who was arrested under stringent UAPA by the National Investigation Agency (NIA) in connection with anti-CAA protest in December 2019 on Thursday afternoon walked out of jail.

The firebrand peasants’ leader, who won the Assam Assembly Election from Sivasagar constituency, was released from GMCH, hours after a special NIA court cleared him in a pending case.

“Today is a historic day for an independent judiciary,” Gogoi told reporters moments after walking out of the GMCH paying cabin.

“Everywhere, we are seeing that there is no democratic atmosphere in Indian polity and policy. But this judgment gives us hope. The UAPA is a draconian law… it should be scrapped. Now, I will fight against the anti-terror law,” Gogoi said.

NIA Special Judge Pranjal Das did not frame charges against Gogoi and his three associates – Dhairjya Konwar, Manas Konwar and Bitu Sonowal – in the Chandmari case, in which they were accused of having Maoist links.

Gogoi will visit the home of Sam Stafford, the 17-year-old student who died in police firing during protests against the anti-CAA movement in 2019.

Gogoi was first arrested on December 12, 2019, in Jorhat following an anti-CAA rally.

His case was handed over to the NIA two days later and he was booked on charges of sedition and under UAPA for allegedly being an overground worker of the Maoists.

Several cases were filed against Gogoi in police stations in towns across Assam — Sivasagar, Dibrugarh, Gaurisagar, Teok, Jorhat — following the violence, out of which two (Chandmari and Chabua) were taken over by the NIA.

In both cases, he was charged with sedition and UAPA, among other offenses.

Gogoi was cleared of all cases against him, including the Chabua case, last month