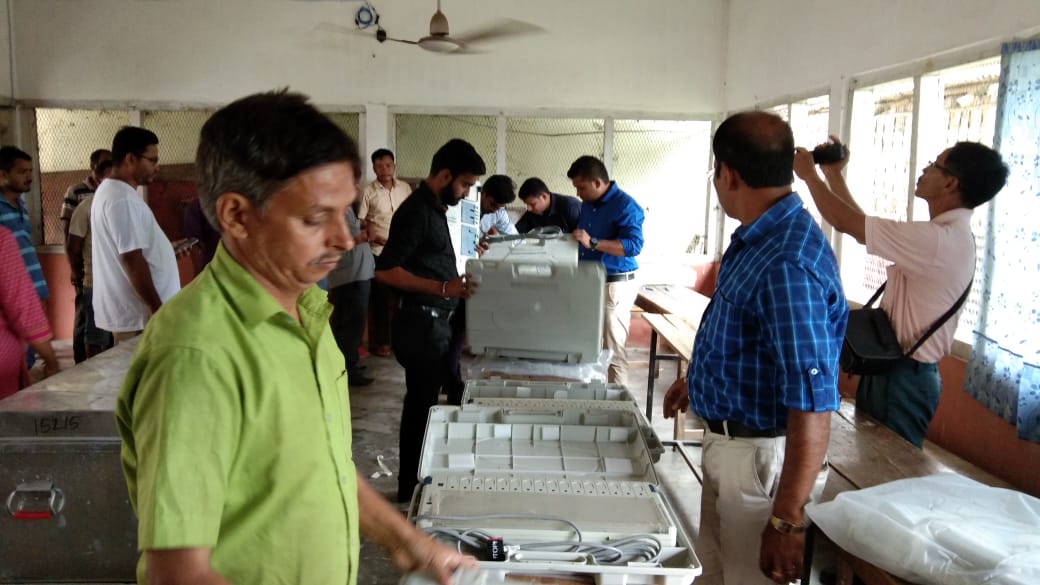 EVM checking going on at the premises of DC office, Diphu, on Tuesday. Image - Northeast Now

The process of checking Electronic Voting Machines (EVMs) by the district administration has begun in Karbi Anglong.

In presence of representatives from political parties including Autonomous State Demand Committee (ASDC), Congress, Bharatiya Janata Party (BJP) and Asom Gana Parishad (AGP), election officer S Dutta, Additional Deputy Commissioner (ADC) Nahorsing Bey and other officials, the EVMs were taken out from the warehouse in the DC office premises and those were checked one by one.

The process of taking stock of the EVMs will continue till September 17 involving more than 500 EVMs in the district.

With the sounding of the poll bugle by the ruling BJP last week for the general election (Lok Sabha) in 2019, the process of priming up the election machinery is likely to pick up in the coming days.

It may be mentioned that the Election Commission of India (ECI) has set the ball rolling for the next year’s Lok Sabha polls in Assam by starting the crucial exercise of sending new Electronic Voting Machines (EVMs) to different parts of the State.

According to media reports, following a directive from the Election Commission of India, the Election Department of Assam has started its preparations for the 2019 Lok Sabha elections to be held in 2019.

The Lok Sabha election is scheduled to be held in between April and May next year. As per reports, the Model Code of Conduct is expected to come into force by March in 2019.

The new EVMs, to be used in the next Lok Sabha elections, which have been sent by the Election Commission, have already reached different parts of Assam.

The Electronic Voting Machines have been supplied by the Electronics Corporation of India Ltd (ECIL) at the directive of the Election Commission of India. Each of the EVMs consists of one controlling unit and one ballot unit.