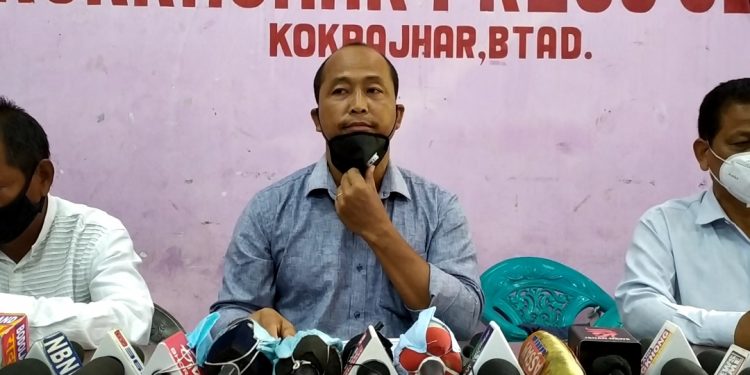 The People’s Joint Action Committee for Boroland Movement (PJACBM) on Tuesday demanded that the election to Assam’s BTC should be held as early as possible to ensure a stable administration and fast progress of the region.

The committee also said the war of words among the leaders and supporters of different parties has turned in the ugliest manner which is not a good sign for the upcoming generation.

Addressing the media persons, the chief convenor of the PJACBM Garjan Mashahary said the BTC was being run by Governor since the last part of April and many developmental activities have been halted due to lack of elected council Government.

He said the ongoing crisis in BTC amongst the political parties and their hate speeches have not only affected the people in the party line but equally to all sections of people to the grassroots level in a very adverse manner.

Mashahary said there was lots of war of words to the most degraded level in social media.

He said the threatening of lives to each other for the purpose of political opportunities is another wrong message for the upcoming younger generation.

He also said in a huge democratic country like India, coming to political power was completely a people’s choice but tragically what is going on in BTC prior to a long-pending council election has become deadlier than the COVID-19.

Besides, these, in these days of the pandemic situation and flood-like situation have affected the people at the most and people normally look for their representatives because it’s a democratic country.

When asked as to how much it is possible for holding of BTC election in the ongoing coronavirus pandemic that the State has been facing for the critical stage, Mashahary replied that the spread of the virus was still thin in BTC region and it is better to hold the election at the earliest before the pandemic takes the worst turn.

He said the election commission could conduct the election with imposing all protocols of lockdown at time otherwise; it would not be possible if the spread of virus takes worse than ever.

He also said the Governor could have given a chance to former BTC chief Hagrama Mohilary to run the council as caretaker.

He further said the challenges against Governor’s rule were pending at Gauhati High Court and he hoped that there would be a positive judgment on that.

The chief convenor of the PJACBM drew the attention of the State Election Commission to conduct the council election at the earliest.

The press meet was also attended by the advisor of the PJACBM Gangadhar Ramchiary.