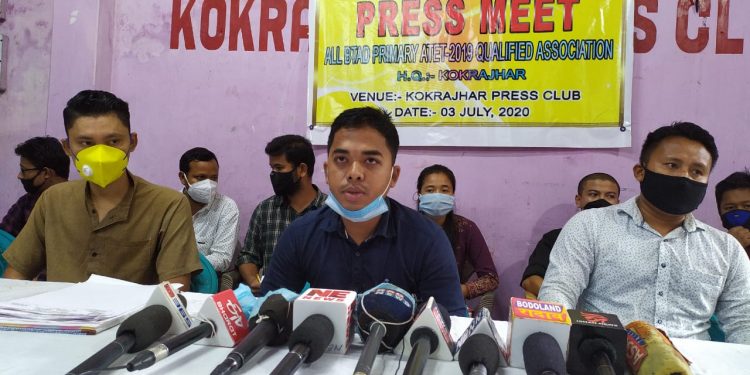 All BTC Primary TET-2019 Qualified Association has demanded that the Assam Government should give them first priority during appointment of teachers.

The association has decided to call on the state education minister Himanta Biswa Sarma to submit their charter of demands.

In a press meet held at Kokrajhar Press Club, the president of All BTC Primary TET-2019 Qualified Association-Tonmoy Choudhury said they had formed the association on June 14 last to look after the issues of TET qualified students of BTC (ZONE-2).

He said the association comprising 21 members with president- Tonmoy Choudhury and secretary Daoharu Narzary will soon meet the education minister to submit memorandum to address their problems.

He also said they will call on the Governor to place their demand for appointment of qualified persons in BTC zone.

He also said the TET examination was organized by Assam Government itself and so they want first priority in BTC for appointment.

Choudhury said earlier there was an advertisement of TET qualified students for entire Assam region except zone- 2 which is BTC.

He appealed the government to look after the qualified students of BTC for giving priority to appoint them.

They also demanded to clarify the policy of the Government regarding the priority of appointment and total vacancy of BTC region but the Government officials refused to give the details.

They also reiterated that the officials maintained tight lips over the rumour that the BTC will arrange a fresh TET examination for BTC but what will happen for qualified students is a matter of concern.