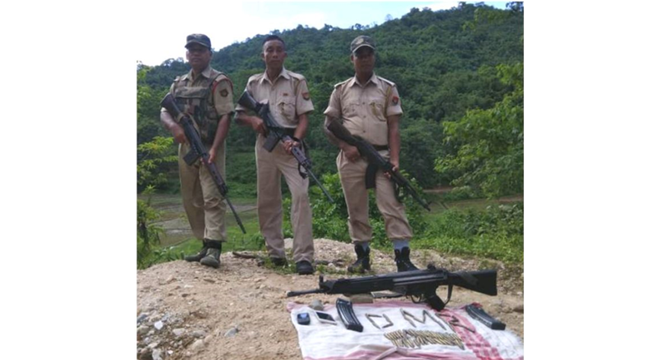 The arms and ammunition recovered from the site of gun-battle. Image - Northeast Now

During a fierce gun-battle with armed militant outfit People’s Democratic Council of Karbi Longri (PDCK), the Karbi Anglong Police was able to cause serious damage to the outfit. Police also claimed that some of the cadres of the out received injuries during the gun-battle.

As per information, on a tip-off a team of Karbi Anglong Police carried out an operation against a group of militants of PDCK, which was formed in October 2016, at around 6:20 am on Saturday at Bokaram Tokbi Gaon under Dolamara Police Station in Karbi Anglong district.

During the operation, a group of armed cadres of the PDCK were successfully chased by Karbi Anglong Police.

“Reportedly, high-ranking cadres of PDCK were taking shelter at the location,” Karbi Anglong Police stated, adding, “As the gun-battle ceased, the area was searched and during the search operation, one HK 33 Rifle, 70 rounds ammunition, 2 magazines of the rifle, 2 numbers of mobile phone, 1 knife, torch and one bag were found.”

Karbi Anglong Police also claimed that “some senior cadres of the outfit were injured” during the gun-battle.

Police have launched a massive search operation in the area to nab the militant cadres and also have mounted pressure on the routes of possible escape.

It may be mentioned that the United National Liberation Front of WeSEA (UNLFW) through a notification declared the People’s Democratic Council of Karbi-Longri (PDCK), as the new member of the UNLFW, which is a joint platform of most of the militant outfits of the Northeast.