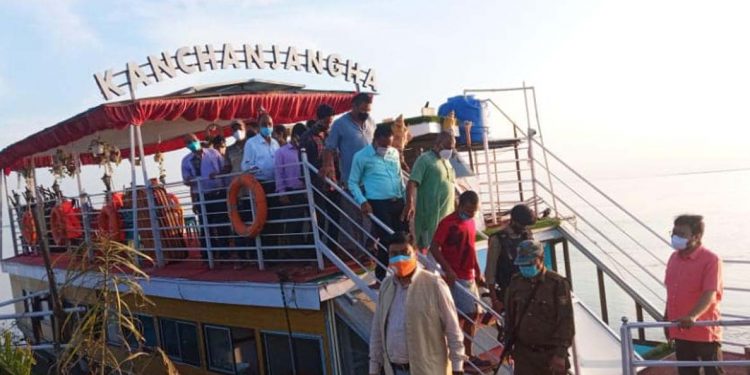 A view of the floating restaurant, Kanchenjunga, in Dibrugarh. Image credit - Facebook

Alleging that the Indian Railways has made “U-turn” with regard to the floating restaurant, Kanchenjunga, in Dibrugarh district, Saikia in a letter to Goyal said: “In recent months, this floating restaurant has been developed as a path-breaking site for river tourism by a local entrepreneur, Gautam Bordoloi.”

In its short span of existence, this enterprise has been successful in providing direct and indirect employed to over 150 local unemployed youths despite the Covid19 situation, the letter said.

“Your ministry had itself posted a laudatory tweet in January last regarding the floating restaurant and further mentioned that the Railways has provided ‘its vacant land’ for the purpose,” Saikia mentioned in the letter.

The senior Congress leader has expressed shock that the “Railways recently launched an eviction drive against ‘Kanchenjunga’, reportedly because Bordoloi was unable to pay the exorbitant rent/tax demanded of him by the Railways”.

My letter to Hon’ble Railway Minister Shri Piyush Goyal ji, regarding the fact that the Indian Railways has performed an unbelievable U-turn with regard to a floating restaurant named 'Kanchenjunga' near the Bogibeel Bridge in Dibrugarh district.@PiyushGoyal @mygovindia pic.twitter.com/dbTzUoY36Z

It is preposterous to expect a newly-established business enterprise to earn enough profits to pay such a huge amount as rent/tax to a government organization, and that, too, a business enterprise located in the backwaters of an economically weak state like Assam, the Opposition letter stated.

“It is dismaying to note how that avuncular encouragement displayed by the Railways six months ago has suddenly got transformed into a ruthless avarice reminiscent of a moneylender,” Saikia wrote.

Saikia urged Railway minister Goyal to ensure that the “Railways abandons its policy of ruining the ‘Kanchenjunga’ enterprise”.

Congress leader Saikia demanded that the Railways should allow entrepreneur Bordoloi to continue his work unhindered so that he may inspire other Assamese youths to follow in his footsteps and, thereby, contribute to creating a self-reliant Assam.