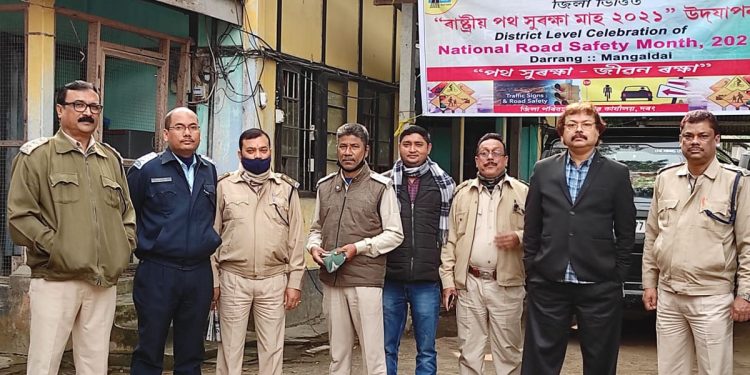 After a video of Darrang DTO Kumar Sanjib Krishna, being in an inebriated condition while on duty with his subordinate enforcement staff, now an audio clip of the suspended officer has gone viral.

The Darrang district transport officer (DTO), Kumar Sanjib Krishna, was suspended under the Assam Services (Discipline and Appeal) Rules 1964 after a video clip, where he is seen in an inebriated condition while on duty, went viral.

In the audio clip, the suspended DTO is heard in a conversation with one of his fellow enforcement officers, who was directed to intercept all the vehicles carrying bricks.

The enforcement officer is heard replying that the vehicle owners should be given one month’s time as they are taking something on monthly basis.

“Let us give them one-month time as we are taking something from them,” the enforcement officer is heard saying in the viral audio clip.

At this, DTO Krishna got aggravated and said, “I don’t know anything; I am least bothered about what you are taking and what I am saying must be followed. I don’t want to become a scapegoat.”

If the conversation of the viral audio clip is to believed, a section of corrupt enforcement officials, engaged to check overloading of vehicles and impose penalties, are involved in illegal monetary deals with commercial vehicle owners.

Such deals are allegedly fixed on a monthly basis for regular plying of the vehicles with overloads across the district.

The allegation against a section of corrupt enforcement staff, who hardly bother about revenue collection of the department, is very common.

It is alleged that some enforcement staff also make unauthorized engagement of individuals, who collect illegal monthly charges wearing ‘khaki’ uniforms from trucks, dumpers and other goods-carrying vehicles.

In the audio clip, the suspended DTO is heard charging the enforcement staff of demanding Rs 60,000 from three tractor owners on condition of release of the vehicles detained on charges of violation of MV Act.

From these facts, it comes to light that a cold war continued for quite some time between the suspended DTO and a section of enforcement staff over the issue of imposing fine on overloaded vehicles.

In such circumstances, sabotage in making the video recording of DTO Kumar and the audio clip going viral cannot be ruled out, sources said.

Only a high-level inquiry will make things clear.