Assam: Naked flagpole atop Gandhi Mandap turning out to be national shame

The tricolour atop the flagpole at Gandhi Mandap in Guwahati was expected to be a pride for all the denizens, but what it has turned out is nothing less than a national shame.

The flagpole, the third highest in the entire country was witnessed to have been standing shamelessly naked without its pride – the national tricolour on Wednesday morning.

Locals of Sarania region of the city woke up to witness to their dismay that the tricolour was not flying on the Guwahati skyline on Wednesday.

Kabyajyoti Bora, a local resident, for whom it has become a ritual to proudly ‘salute’ at the flag and begin his day, told Northeast Now, that what was supposed to be a pride has now turning into a shame. 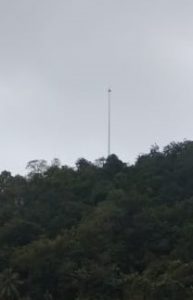 Another local, Hiranyajyoti Saikia was of the opinion that if the flag is not there most of the days, what’s the use of spending so much of money in it. “A sheer wastage and a shame,” he quipped.

They suspect it must have been torn in the inclement weather that the city experienced on Tuesday and custodians to escape from further embarrassment must have hurriedly pulled down the torn flag.

Notably, on earlier two occasions, both the Assam Government and those at the helm of affairs in taking care of the flagpole were taken to task from various quarters.

Even denizens took to social media to lambast the Sarbananda Sonowal government for sheer wastage of public money only to invite national shame.

When the flag was torn for the second time last month, the authorities were mulling the idea of not flying the tricolour regularly.

A top official of Guwahati Smart City Limited was quoted as saying that the flag will now fly only on important national days.

Now, denizens are questioning the State Government – was the much-hyped third tallest flagpole worth the more than Rs two crore spent as part of Smart City project?