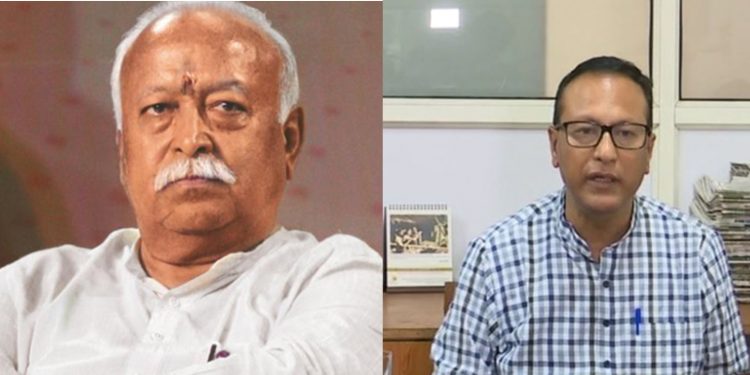 Assam MP Pradyut Bordoloi on Sunday lashed out at RSS chief Mohan Bhagwat for his statement that rearing of cow has diminished the criminal mindset of jail inmates.

Rashtriya Swayamsevak Sangh (RSS) chief Bhagwat made the statement at an award ceremony in Pune on Saturday.

Bhagwat claimed some jail authorities had told him that the criminality of the jail inmates started diminishing once they were given the task of rearing cows.

He also claimed the BJP should start caring for animals first before taking steps to stop the increase of crimes against women.

Sharing a news report on Bhagwat’s statement on cow rearing, Bordoloi tweeted, “Practice what you preach! With #bjp having highest cases of crimes against women they could surely heed his advice first.”

Practice what you preach!
With #bjp having the highest cases of crimes against women, they could surely heed this advice first. https://t.co/TMiGQan2K5

A media report quoted Bhagwat as saying in Pune: “When jails set up cow sheds and prisoners started rearing cows, the authorities saw that the criminal mindset of these prisoners started diminishing, and I am telling you this from experiences shared by some jail authorities.”

The RSS chief also said psychological experiments need to be carried out on jail inmates in different places of the country to find out the change in their behavior after they had reared cows.

He also claimed documentation is necessary to prove the qualities of a cow.

The report also quoted Bhagwat as saying: “Cow is the mother of the universe….it nurtures the soil, it nurtures animals, birds and it also nurtures humans and protects them from diseases and makes the human heart as tender as flower.”