Assam: MoA between NHPC and government triggers series of protests in Lakhimpur 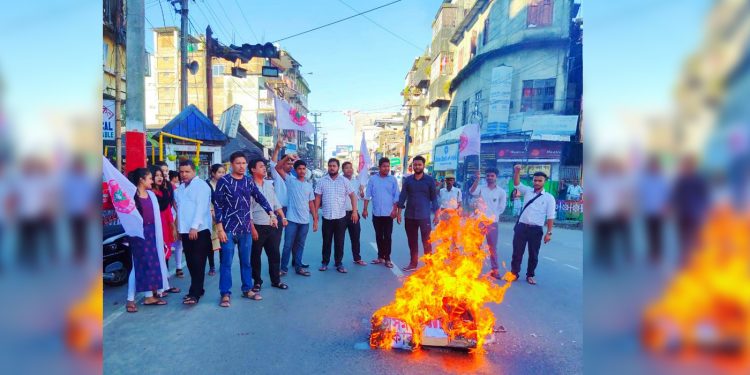 The Lakhimpur district unit of the All Assam Students’ Union (AASU) on Saturday burnt the effigy of Assam Chief Minister Sarbananda Sonowal.

The effigy was burnt in protest to the signing of the draft Memorandum of Agreement (MoA) between National Hydro-electrical Power Corporation (NHPC) and Assam government on 2000 MW Lower Subansiri Hydrol Electrical Power plant (LSHEP) on Friday.

“CM Sonowal is a liar and a betrayer. He has put the safety and security of the people of Assam living in the downstream areas of the river at risk,” the release further stated.

“The MoA was signed by keeping the general public in the dark,” the release further stated.

It also questioned the reason behind the stoic silence maintained by Lakhimpur MP Pradan Baruah.

The student body further said before signing the MoA, the report of the expert committee formed after the tripartite meeting among AASU, NHPC and Assam government should have been taken into account.

“The expert committee was supposed to take the opinion of experts from Assam and local people living in the downstream areas of the river,” the statement added.