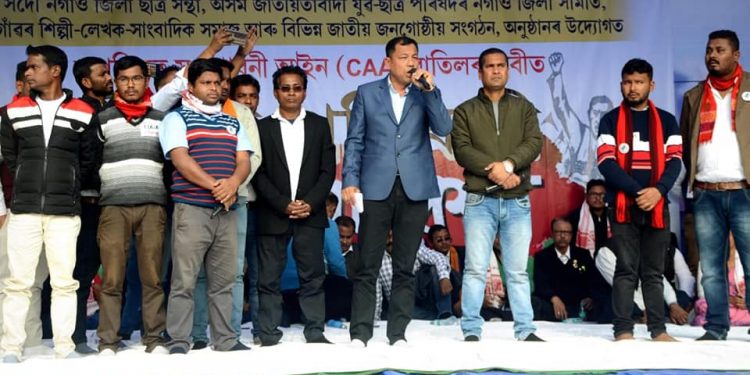 The rally which was named 'Ronohunkar was addressed by the AJYCP general secretary Palash Changmai.

Thousands of people participated in a rally on Monday to protest against the Citizenship Amendment Act (CAA) at Titabar town in Assam’s Jorhat district.

The protesters, holding banners and placards against the amended Citizenship Act, chanted slogans against the BJP-led Central and State Governments and also against BJP leaders in Delhi and Dispur.

The rally which was named ‘Ronohunkar was addressed by the AJYCP general secretary Palash Changmai.

He said they imposed a law which was opposed by the vast majority of the people of the state as CAA was perceived as a big threat to the existence of the culture and languages of indigenous people of the State.

Targeting chief minister Sarbananda Sonowal and his cabinet colleague Himanta Biswa Sarma for supporting the Act, Changmai said that the two did not have the right to decide about the destiny and future of Assamese people.

“The Assamese people themselves will decide about their future and destiny as it is the public who voted the BJP, AGP and their alliance partners to power for a five-year term… it is again the public who know well to dislodge political parties at the hustling,” he said.

The AJYCP leader said protests against CAA has spread from streets to sports venue with slogans against the chief minister and the finance minister were raised by the spectators at the T-20 match disrupted by rains in Guwahati on Sunday.