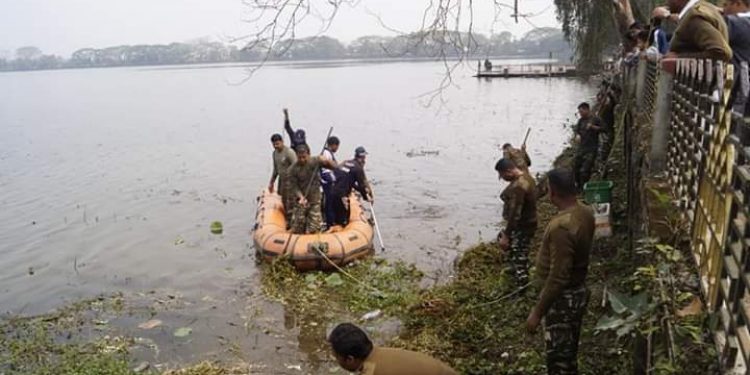 The Sivasagar district administration in association with Central Reserve Police Force (CRPF) personnel and State Disaster Response Force (SDRF) on Sunday carried out a cleanliness drive in and around the historic Borpukhuri tank in Sivasagar of eastern Assam.

Commandant of 149 Bn of CRPF Jecob V Tusing was also present on the occasion.

On Sunday one portion of the tank was cleaned. According to Tusing, lots of work are still to be done. In all probability, the team will again carry out the cleanliness drive next Sunday again to cover the remaining part.

The commandant of 149 Bn of CRPF also said that next time the team will need two rubber boats.

On Sunday, the SDRF team had only one boat. In next operation two rubber boats could be engaged. On Monday, the team will carry out similar cleanliness drive at the Sivadol premises.

The team will take help of the local municipal authority in the upcoming cleanliness drives.

Notably, the Sivasagar district administration is on its toes for the ensuing Sivaratri mahotsav on March 3 to 6 next which is expected to witness a huge footfall of tourists both from across the country and also abroad.

The deputy commissioner said it will be a priority of the district administration to maintain cleanliness in the historic town of eastern Assam.